Yesterday, the Boy Scouts of America formally voted in secret ballot at the National Council's annual meeting, to open their ranks to openly gay boys for the first time. 61% of the Council's 1400 members supported the proposal, which will become policy on January 1st, 2014.

Growing up in a small California town in the 1950's and 1960's, the people our family knew and socialized with could hardly have imagined that the Boy Scouts would one day become the battleground over Gay Rights. The organization, formed in 1910, has traditionally had religious affiliations, so the "moral" side of its charter has always been tinged with a religious unctuousness.

My parents forbade me from joining the Scouts, since as they interpreted it, it always involved at least as much time and bother for the parents (not to speak of the expense), as it did for the boys. In our family, we looked at Scouts as amusingly pretentious do-gooders who, rather than exhibiting any superior character, tended to be conventional, with a smarmy insincerity.

The Boy Scouts has always seemed to me to have a questionable function. It's obviously designed around the concept of military service, with the cute little military school uniforms, medals and patches and awards ceremonies, and the emphasis on "training" (i.e., camping trips and wilderness "survival" trials etc.). The other obvious hypocrisy is the close connection to organized religious institutions, the "God and Country Award" as if the Scouts--and all they represent--had the official endorsement of God herself.

It was always hard for me to take anything about Scouting seriously. Nevertheless, as I say, it would never have occurred to me to predict that the Boy Scouts would one day become the testing ground for sexual freedom.

My beliefs regarding sexual behavior and regulation belong to an earlier generation, and I'm aware that clinging to old belief systems and habits is a sure sign of generational irrelevance. But I'm moved to question the application of sternly indignant challenges to traditional practices, especially when they seem opportunistic, and basically selfish in their intent. 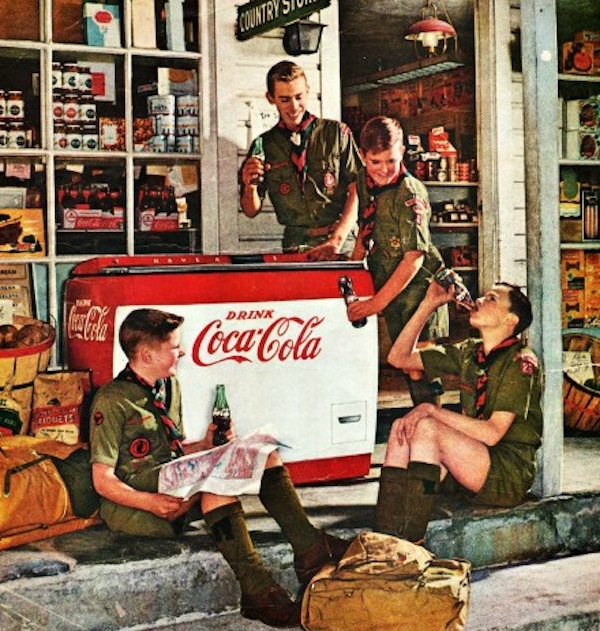 Do you suppose that the Boy Scouts got a nice little stipend for this commercial use?

My understanding of the moral imperatives regarding the sexual behavior of children, adolescents and young adults goes something like this: Sexual activity in our culture is forbidden among children, actively frustrated among adolescents, and tacitly permitted among "adults" (over the age of 18), provided that education is made available, and reasonable precautions are used against infection, pregnancy and other kinds of complication(s). What that means in practical terms is that our society still believes, publicly, that sex is not only something you aren't formally "allowed" to do under a certain age, but that it isn't the business of our institutions to encourage children or adolescents to obsess about sex, sexual practice, sexual "difference" or any of the adult issues having to do with sexual identity and behavior.

It seems to me that the process of coming-of-age ought to be synonymous with growing up. I.e., it shouldn't be the business of the church, or the school, or clubs or societies, to get children or adolescents to "declare" their sexuality. It seems clear that human beings mature at different rates, but it's also perfectly clear that sexual "awareness" and reproductive capacity begin long before a commonly acknowledged "majority" age. Our notion of a responsible, prepared adult citizen capable of acting and behaving as a member of a civilized society assumes that sexual activity has a personal, ethical dimension. In other words, the official version we subscribe to is based on the assumption that sex, and sexual identity and practice, aren't things that one is "entitled" to until one has matured sufficiently to accept the responsibilities and probable consequences of engaging in it.

We don't ask young boys of 9 or 11 or 14 to "declare" their sexuality, any more than we would openly inquire of them what kinds of sexual practice they might "prefer" or have found intriguing. Sexual identity, whatever kind of sexual identity, isn't something society believes should be addressed until a certain age. Just as we neither encourage nor expect boys and girls to explore sexual practices before they are technically adults, we shouldn't demand of our institutions that they formally encourage young boys and girls to figure out what kind of sex or sexuality they're drawn to.

As children and adolescents, we become aware of our sexual nature, and are curious about it. But awareness and curiosity and interest aren't things upon which to base a principle of behavior. I'm not speaking here of any doctrinal or religious notion of "innocence," but the practical acknowledgement that children and adolescents aren't prepared emotionally or practically to address the meaning and power and consequence of their sexuality. Though sexual maturation may occur at different rates, it is not society's interest to encourage children to attempt to define their sexual nature in advance of an age when they can be expected to take full responsibility for that awareness, or--as in the case of sexual difference--for their "chosen" sexual role as adults.

Demanding that the Boy Scouts openly acknowledge the presence of "gay" members, or "gay" scoutmasters, is not just to legitimate the whole sphere of sexual difference, but to force all members and leaders to declare, on record, their sexual preference.

Sexuality is a private matter. That is to say, if I know I'm straight or gay or any other variation, it should not be required of me that I make a formal, public declaration of my sexuality, especially at an early age, an age in which I may not even understand who I am, or what the possible consequences of such a feeling or act might be.

I could care less about the institutional integrity of the Boy Scouts of America, but I do think the attacks upon its charter, upon its tendency towards a "no-tell" policy, are selfish, self-serving attempts to legitimate alternate sexual behavior. No boy, at 9 or 11 or 14, should be encouraged to "see himself" as an actively sexual being, much less as an active gay one. Just as we don't encourage boys--in or out of the Boy Scouts--to "declare," much less to "explore" their sexuality, we should not be demanding that chartered organizations force their members to do so.

Gay rights advocates want to force change by invoking sexual tolerance as a lawful "right" in public and private organizations. It's one thing to create organizations designed to promote behaviors or activities you believe in; it's another to force existing organizations to transform themselves into something they were never created to be. The Boy Scouts of America wasn't created to facilitate the sexual development and acknowledgement of gay men.

Since an organization like the Boy Scouts was created to build character and to prepare boys to become responsible citizens as adults, you would think that formally acknowledging and fostering Gay behavior in their midst might seem simply anachronistic. If an organization designed to build character were openly to acknowledge the likelihood of--or even to tacitly encourage--boys to engage in homosexual behavior as members of the Scouts, either in or out of club functions, you could say with justice that the Boy Scouts of America would be advocating Gay behavior. As much as I look with disdain upon it, this isn't something they should be required to do.

Boys who decide, privately, at a certain age, that they're sexually different, are perfectly entitled to believe what they like about themselves. When they attain their majority, they're perfectly entitled to explore and pursue their sexuality within the limits of the law. But no organization, public or private, should be required  to encourage them to do this when they are still minors.
Posted by Curtis Faville at 9:33 AM

Will every Boy Scout be asked his sexual orientation -- or will it just be O.K. if he wants to tell everybody that he's gay ?

I don't know - but I do have fond memories of the scouts -- as one of the things that a kid in the sixties could do after school and on weekends -- back before parents were required to haul them around to soccer games or piano lessons.

My parents encouraged me not to take the rigamarole too seriously, and indeed, I never advanced beyond Second-Class scout, and never earned any merit badges.

But I did develop a taste for camping which I pursued until my wife became too feeble.

I also developed a habit for weekly classes in some kind self-improvement -- which may not have improved me very much -- but have been delightful.

And one more thing in their favor -- at least as I remember it -- Scouting was not very competitive --like sports. (nothing wrong with competition -- but I prefer something more mental than hitting/kicking/throwing a ball)

It was more about exploring a world of arcane knowledge -- like tying various kinds of knots.

I wish I'd kept my uniform.

I don't really mean to denigrate the Boy Scouts.

Our family knew another family that was very big into Scouting, and they were also devout Presbyterians. The eldest son made Eagle Scout and got the God and Country Award, and got his name in the paper. He was a good student, and went on, I'm sure, to have an exemplary career in life.

But there was something creepy about this family--social climbers, wanting bigger houses, more cars, more more more. Very tiresomely competitive and middle class. There was an attempt to dragoon me into this foolishness, which I'm happy never happened.

I became a serious fly-fisherman as an adult--didn't need any "official" camping nonsense. As a family we camped and hiked and exercised.

Anyway, the point of my post was actually to defend the Boy Scouts against this appropriation of their mandate. I wouldn't be surprise--or disappointed--if an entirely new organization was formed, to preserve the original goals, and to set aside all this Gay nonsense.

Chris, I appreciate your thoughtful and respectful comments. I grew up in the mid 60s in Ohio and from a very young age knew I was "different". I had no interest in sports and prefered music, movies and gymnastics to anything rough and tough. My brother was a Scout and when my time came to join the Cub Scouts, it was suggested via my brother that I might not "fit in" . So I didn't join. It was one more place where I didn't fit in and no one seemed to think that it was wrong for the Scouts to suggest it. At this point, I wasn't sure what my sexulaity was - in fact I really didn't know what sexuality was in the first place. Scouting wasn't about being a sexual being, it was about belonging to a club. A club I was denied from the outset . Gay kids or kids who are not "normal" need a place where they know they will be treated with the same respect as the others. Scouting promotes decency, respect, and honest endeavors. I would think that a true Scout would be proud to have all kinds of friends no matter what their sexual orientation. That is what a Democratic Society is all about.