I live in the East Bay of the San Francisco Bay Area. I commuted to San Francisco for 27 years, progressing through the AC Transit Bus system, the Bay Area Rapid Transit train system, and the private automobile. For the last 12 years or so, I didn't work on Fridays, so I never had the misfortune to experience the so-called "Critical Mass" bike traffic jam which has developed into a regular tradition in San Francisco. For those who are unfamiliar with it, the Critical Mass movement is a bikers' protest organization whose primary function is the disruption of urban vehicular traffic by devoted bicyclists, a monthly event designed to dramatize the plight of cyclists in a mostly car and truck dominated public street system. 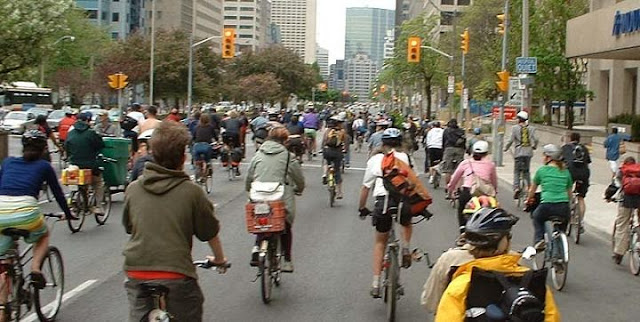 The movement began overseas, in Sweden, but was co-opted by local activists. The movement started small, in the early 1990's, but has grown in scale, and has spread to other places, including Chicago, London and elsewhere.

When I was a kid growing up in the 1950's and 1960's, I enjoyed riding my bike all around our little suburban neighborhood. I had a big newspaper delivery route for four long years, with over a hundred customers. I couldn't have done it without my bike. In those days, bicycles were considered childrens' toys, and by the time I was 14, social pressure made me store mine permanently in the garage: Bikes were for sissies, unless you were training for the Olympics. There's no doubt that my bike served me well, and when I had a job during my last summer before grad school, I got a three-speed narrow-gauge to commute with. I don't know what happened to that bike, but it was the last time I ever depended upon one. Years later, thinking to get some exercise, I got an early version of the new "trail bikes" which had reintroduced the thicker tire after it went out of style--and underground--for a couple of decades.

Today, biking has had a renaissance. I don't know if kids ride bikes like they used to, but grown-ups are riding them in ever-increasing numbers. Partly in reaction to the problems associated with automobile pollution and energy over-consumption, bikes have become symbols of the disenchantment people are having about automobiles generally.

There are good reasons not to drive cars. People have become too dependent upon them, and our reluctance to walk or cycle places is making us unhealthy. We're a lazy people who over-eat and under-excercise, and there's a good argument to be made against the continued over-reliance on automobiles. America's "romance" with the automobile has turned our cities and towns into parking lots, and our highway system has distorted our landscape with huge monstrous structures of overpass, access roads, and walls. The great majority of people need to use their cars less; there's no question about it.

But our culture is built on a transportation system based on vehicular access. America's prosperity was constructed out of the manufacture and private ownership of the automobile. The ownership and use of cars has permitted us to live more conveniently, with less crowding, and greater efficiency, than at any other time in human history. Our ability to move about freely has permitted us to live and work and play and travel in ways that could hardly have been imagined, less than a century ago. Our present dependency upon this transportation paradigm is completely integrated into our daily lives. For better or worse, the automobile is how our society functions. Without it, most of the things we take for granted would be impossible.

Without addressing the larger problems of our transportation systems as a whole, I would point out that our inner cities are crowded and busy, and this congestion is both a cause and a consequence of the complex, interdependent connectivity of the modern world. Prosperous and active cities are symptoms of a rich economy, and a rich cultural matrix as well, and whether we like it or not, the automobile is a crucial part in that interdependence and richness. Most of what we do and consume is only really possible with many vehicles constantly moving people and goods around.

All that activity comes at a price. One of the prices we pay for this interconnectivity and bustling movement is dirt and congestion, and the danger of collisions. Our major metropolitan areas accommodate cars and trucks and busses and even trains, as well as pedestrians, but they weren't designed with bicycles in mind. Motorcycles can compete with cars, because they can maintain speeds and maneuverability that place them on a level plain with four-wheeled vehicles. Not so with bikes.

In the inner city, the only bikes that really "belong" are those ridden by professional deliverymen, who ferry mail and small parcels between buildings and businesses, using their small profile to weave in and out of traffic and pedestrians without getting hung up on clogged city streets.

In our highly mobile society, it's certainly possible to imagine that a small percentage of working people with jobs in the city can as conveniently commute on bikes as they can in automobiles. Weather permitting, they can save money, cut down on the total number of private cars being used, and even save themselves some drudgery (being caught in commuter stalls). But public transportation is designed specifically to service people in this circumstance.

We know that in parts of the rest of the world--specifically in places where automobile ownership is limited--do depend upon bicycles, and we also know about the problems they can cause. When the number of unpowered human bicycles reaches a certain "critical mass" nearly all traffic movement becomes a nightmare. There may come a time when our own country reaches this "critical" tipping-point, and streets that accommodate both kinds of vehicles will become impassable.

In the meantime, it seems reasonable to suggest that our city governments outlaw the use of private bicycles within certain urban precincts, not only for the convenience of flowing traffic and commerce, but for the protection and safety of private cyclists. This may seem counterintuitive, given the context of our recent trends towards establishing bike-lanes and pedestrian malls. But it seems perfectly obvious that unless we are willing to abandon the systems of portability and exchange that facilitate our infrastructure, and everything it provides for us, we had better curtail the increase in bike traffic in corridors that are crucial to our well-being and convenience. Police, first-reponders, ambulances, workers, taxis, buses, utility services--these all command a higher standard of access than private bicycles--particularly those ridden by people who literally have "no business" in the inner city.

It's a modest proposal, but undoubtedly one calculated to arouse the ire of self-styled bicycle activists. The more the Critical Mass bicyclists press their case, the more likely that such counterproposals will be contemplated, as well they should be. Weekend bicycle-hobbyists hogging country-roads, flipping the bird and screaming at vacationers is one thing. Thugs on bikes deliberately bringing Friday commute traffic in major city centers to a halt is another.

A better solution, for many reasons, would be to ban private automobiles from dense urban contexts.

We've come to think that cars are the problem in cities, and there's an argument to be made there.

But most of the people who drive cars downtown either work there, or have some specific, relevant business to transact. Downtowns in major metropolitan areas are unsuited to the casual, slower-paced activities of neighborhoods, or small suburban shopping enclaves.

The Critical Mass bicyclists are people who, for the most part, like to ride bikes on weekends, or for exercise. It's a rare worker who actually commutes on them, and I suspect that if people really began using them in significant numbers, the problems they'd create would present new insoluble dilemmas.

I'm not a fan of urban "malls" or "pedestrian" areas, where people have to park in a structure, and then bus in or walk in. It's a very artificial construct.

Bikes are fine, where they can maneuver with ease. But they don't belong down on Montgomery Street.