As a unit of measure, the paragraph may be the single most important quantity in literature.

The individual word, isolated from the context of the sentence, has limited applicability. The sentence, of varying lengths, may be as short as a single word, or as long as a paragraph, and may go on for pages. But a paragraph, as a unit--as a cluster of meaning, built out of multiple statements, all of which are directed to a unified theme--probably is the proportion that best demonstrates a writer's skill and imagination. 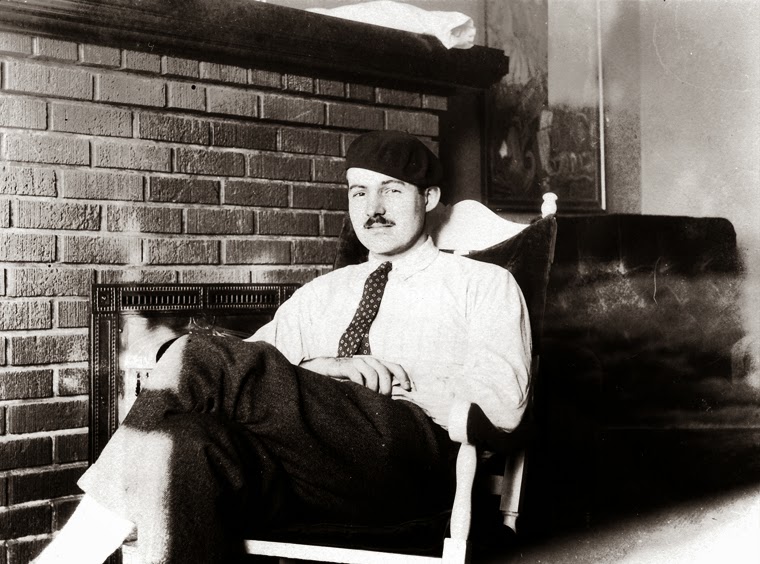 Hemingway is often cited as a writer who had mastered the art of a certain kind of writing. Coming near the beginning of Modernism, Hemingway created a literary style made out of relatively simple language, employing rhythmic repetition and specific concrete detail to make a propulsive and accessible format for his fictional stories.

His method by now is well-known: Short, grammatically straightforward statements, repeated phrases and words, vivid description with an impressionistic membrane of data smoothly organized, without abstraction, towards a basic, powerful effect. This piling-on of phrase upon phrase, rich in present participles (or gerunds), without commentary, has an overwhelmingly convincing quality.

It doesn't argue, or prod, or linger, it simply moves forward, with confident determination, towards its goal.

One of my favorites is the first paragraph of the short story "In Another Country", first published in his collection Men Without Women [1927]. It belongs to a cluster of pieces referred to as the Nick Adams stories, Adams being a fictional stand-in for Hemingway the narrator. They relate events in Hemingway's own life in the Midwest, growing up in the country, and later in Europe during and after World War I.

In the fall the war was always there, but we did not go to it any more. It was cold in the fall in Milan and the dark came very early. Then the electric lights came on, and it was pleasant along the streets looking in the windows. There was much game hanging outside the shops, and the snow powdered in the fur of the foxes and the wind blew their tails. The deer hung stiff and heavy and empty, and small birds blew in the wind and the wind turned their feathers. It was a cold fall and the wind came down from the mountains.


This paragraph is a perfect example of how Hemingway's style works. Part of its appeal is that it could be the introduction to any one of a number of possible stories. Nothing has happened. It's merely the setting of a scene. Like a lot of Hemingway's work during this period, it refers somewhat obliquely, and cynically to the progress and presence of war. It is only "the war" as far as we know, almost a generic war in the way that it refers to no specific conflict, and no issue associated with it. All we know is that the narrator (and someone else) no longer "go to it" any more. There is a fine irony in the word "any more." A war isn't something you simply "go to" like a performance, or an errand. It puts the whole concept of war in an entirely uninspiring light, without in any way specifying what war it is or what it's about. Then we just get description. It's the Fall of the year, and beginning to turn cold.

There are a series of synesthesic impressions--

which are enumerated in a verbal stream of consciousness which evokes our physical memory of the qualities he uses to create a whole canvas of feeling. The dark may come early, but the lighted streets may seem prematurely glimmering as one walks along at twilight looking in lighted shop windows. There is freshly killed game hanging outside a butcher-shop. But then, in the second clause, we get an odd detail: ". . . the snow powdered in the fur of the foxes and the wind blew their tails." Clearly, the foxes aren't hanging outside the shops; they're loping around the countryside. Initially, we associate the flakes of snow, which hasn't been mentioned until this point, with the dead carcasses which are hanging from hooks (or twine) in front of the shops. But the foxes are still alive. This very vivid detail about snow in fur, and the wind which blows "their tails" is dropped into an otherwise very logical description of a twilit street scene, and yet we hardly question it. This illogical enjambment is effective precisely because it isn't explained; its logic belongs to the synesthesic association Hemingway has created in our minds.

Then we get "the deer hung stiff and heavy and empty." Obviously a thing cannot be heavy and empty at the same time, but the "emptiness" refers to the fact of its being life-less, stiff and cold. But then, in the same sentence, there is another non sequitur, "and small birds blew in the wind and the wind turned their feathers." He doesn't say small birds flew, they blew. We don't ordinarily think of birds blowing in the wind, but we accept this subtle description without question. The detail of "the wind turn[ing] their feathers" implies a very strong wind, in which birds fluttering up have their feathers blown, involuntarily, by the force, so their feather are turned or twisted. It isn't something one often sees, but it's a telling kind of detail to describe the very brisk cold wind the narrator is only referring to tangentially. Like a lot of Hemingway description, it is a secondary condition, in which the main point is only implied by the effect.

Then we get the ultimate "It was a cold fall and the wind came down from the mountains." A beautiful finality in the prosody here, the WIND came DOWN from the MOUNT-ains. It has a conclusive force that closes the paragraph off, like the premonitory thump thump thump of drums at the end of an overture to an opera. 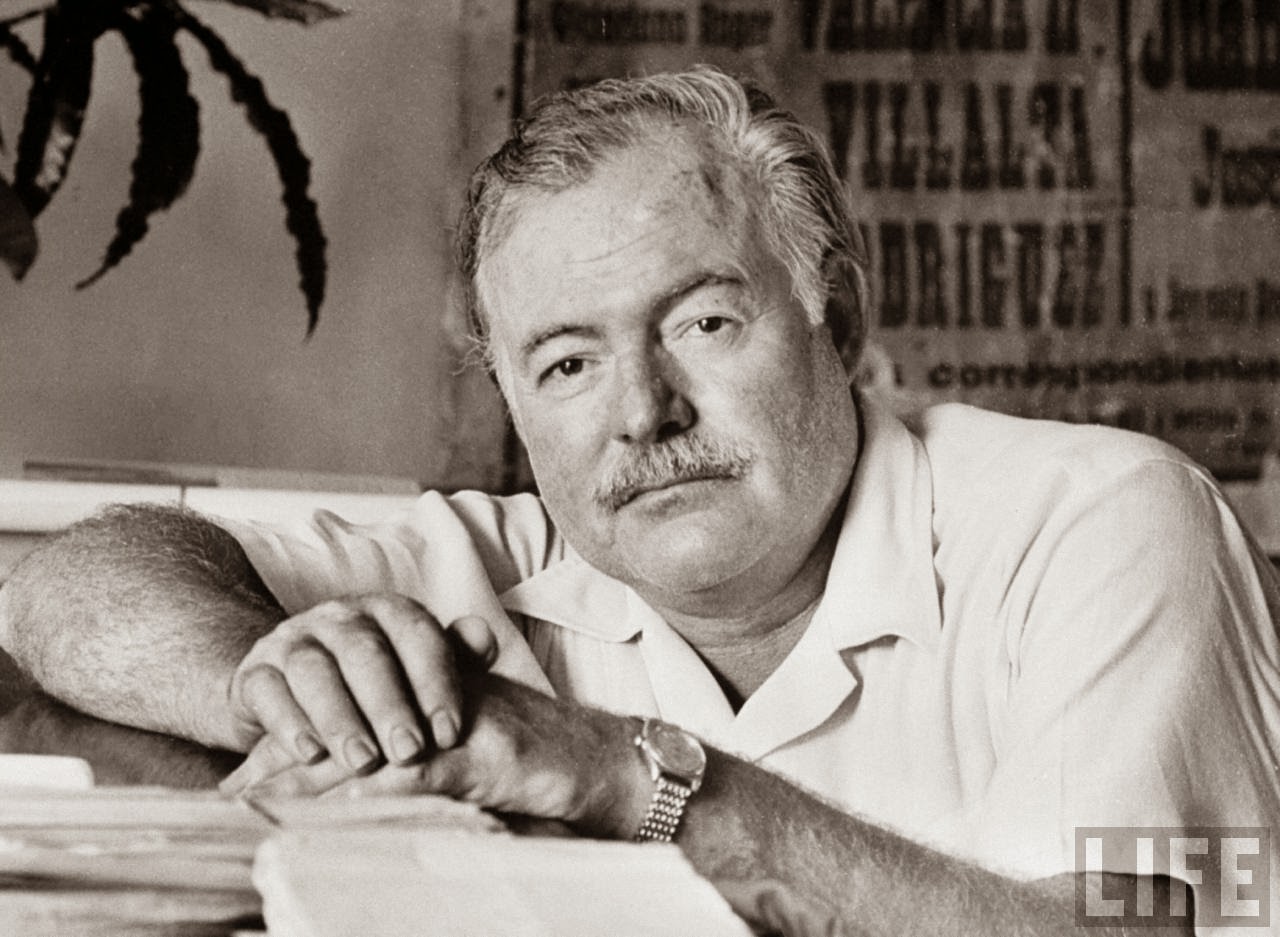 The paragraph contains only 105 words. The language is simple, no word of longer than two syllables, only the most basic objects and impressions are noted: lights, streets, windows, dead carcasses, foxes, deer, birds, feathers, mountains. Through it all is woven a poetic thread of weather and the progress of walking along an urban street (Milan).

Has the narrator ceased to attend to the war because it is becoming colder? Or is the cold somehow a sign of the rejection of war? Clearly the dead game (deer) imply the deaths of war, but only in a symbolic way. There is a rejection of the idea of honor, or bravery, or duty, a hollowing out of the initial commitment to conflict, in favor of a non-violent life of ordinary existence.

In Hemingway's prose, the simplest fact, the most obvious observation is never left simply to stand for itself. In the Modernist sense, things are to be represented truly (as Hemingway would say), without reading too much into them. And in that way, Hemingway doesn't say much about the objects. Rather, it's how he handles them in the stream of the narrative that creates a larger meaning. Hemingway believed that reference was a much more powerful tool than meditation. By implying something, he could achieve more than discussing it. So that if you wanted to imply a deep resentment towards a war, you didn't talk about the war, you talked about how you actually felt, physically (through your senses), while vaguely recollecting it. This is a very masculine, laconic quality, as if the danger of overstatement were somehow unmanly, or futile. Objects, images, symbols were more powerful than "talk" or "literary" elaboration, to represent a feeling.

Hemingway's sensibility was adroit in managing, when most successful, to imply large statements out of small events. If a man and a woman are sitting at a café in a big European city square, they may say only a few words to one another, but we may come to understand their regard for each other, and the eventualities of their relationship, simply by what is suggested in the description of the scene.

This is a difficult thing to do. One is tempted to try to tell the reader what is being obviously addressed, but Hemingway rarely allows himself to do this. Adult behavior is often a record of the subtlest kinds of exchanges--a look, a bodily position, a refusal to speak--and as we mature, we need to say less about the obvious, when to do so would probably cause impatience, or even hurt. It is the undercurrent of delicate feeling that underlies all of Hemingway's work, that of the wounded sensibility which refuses to indulge in self-pity or the easy demonstration of frustration or defeat.

Posted by Curtis Faville at 9:06 AM

give me, instead, the rich luxuriant rain forests of Henry James, Marcel Proust or Hermann Broch. I love tripping over the long sentences, the endless modifiers and the skilfully layered clausal articulations of a world that in the end is always one delicious mystery.

No disagreement here, my lad.

I love James and Proust as much as anyone. Broch I'm unfamiliar with, though of course a well known name in my inventory.

The best antidote to James is Hemingway, and vice versa.

Variety is the spice.

WHat is the gruel?

I've described McMurtry's prose as the daily bread, the least likely to cause digestive distress.

I like to sample 10 books at the same time, which is why I'm drawn to books of poems and topical essays. Books you can pick up and dip into without needing to keep track of the thread.

But Hemingway's paragraphs are pretty nifty, wouldn't you say? Especially for a guy who never went to college, and learned his grammar at the editor's knee?