Recently (July 9th, 2014) the PBS Series "Secrets of the Dead" ran a documentary feature about the controversy over the proposed authenticity of a so-called "second" Mona Lisa painting, a work which purportedly was discovered in a British mannerhouse shortly before World War I. The Isleworth Mona Lisa--as it is known--bears a remarkable resemblance to the well-known original, which hangs in the Louvre in Paris; it is clearly not a copy, but a "version" of the same subject at an earlier age in her life, leading naturally to the supposition that it was painted first, and that the "older" version was done later. 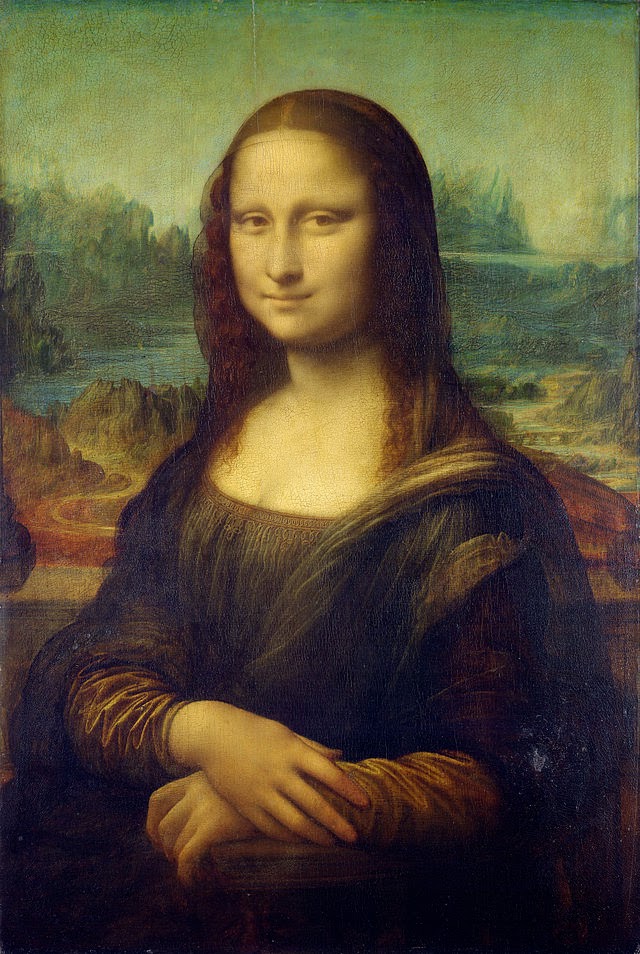 There is reliable documentation that Da Vinci began work on a canvas referred to as La Gioconda in about 1503-5. The revelation of the existence of this other work has caused a lot of speculation in the art world about its original. Such speculation is inevitable, given the hugely iconic presence of the original Mona Lisa, and the notorious forgeries that have come to life over the last century.

Could Da Vinci have painted both works, at different times? If so, why? Given what is known about the working procedures within his atelier, it is possible that the Master may have given some responsibility to apprentices or assistants in his studio, to finish an incomplete work, or a study. It is possible that an apprentice may have undertaken a copy in secret.

Da Vinci was known to be a tireless researcher into materials, striving to refine and improve the effects of pigment by experimenting with the chromatic variations of materials, layering pigments, and so forth. 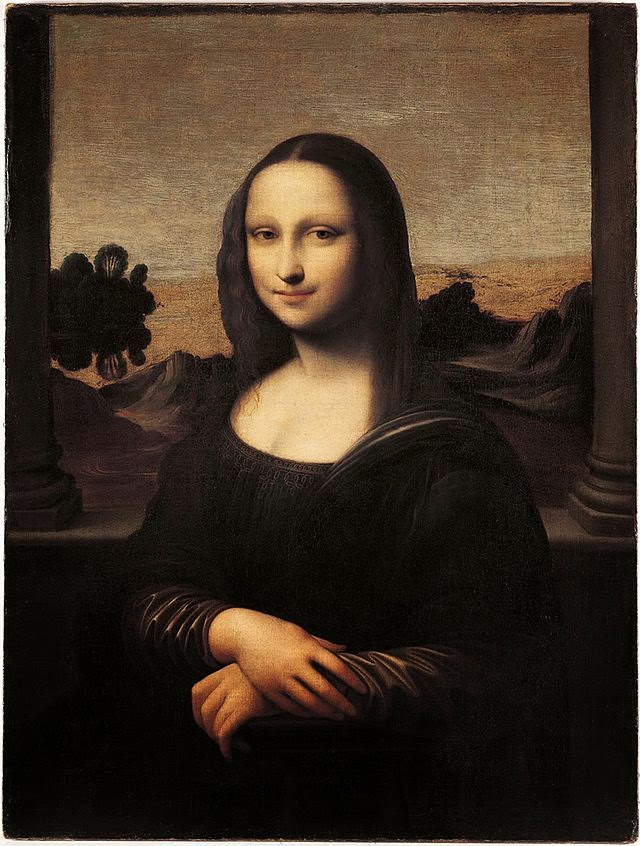 The Mona Lisa has been admired and studied for centuries. Critics and scientists have speculated about how its hypnotic fascinating allure is accomplished. Da Vinci was able to give the impression of life-likeness which is extremely difficult to do. It goes well beyond verisimilitude. The Mona Lisa has a kind of illumination, an animus,  that is uncanny. On one level, this is an effect that has become a kind of cliché among art patrons. The face has a kind of supernatural photo-genesis of presence--not photographic, but clearly an effect achieved through the subtle manipulation of reflectivity. The skin tones seem to glow from within, the very essence of a living soul.

Against the suspicions of detractors and cynics regarding the new painting's authenticity, a phalanx of experts have run a battery of various kinds of tests--scientific and aesthetic (including carbon dating which puts its creation spot on in the second decade of the 16th Century)--on the canvas, and have declared that it meets all the relevant criteria. It's not a fake, or it's the best, most fool-proof, fake that has ever been perpetrated. The experts not only believe it was done at the correct time, they are convinced that the painter of the original Mona Lisa is unquestionably the creator of the "younger" version. I'm not an expert in these matters, but the discussion was sufficiently straightforward and not in the least evasive.

The question thus becomes what the significance of this new artwork will be, and what effect it might have on the reputation (and valuation) of the known work. And, obviously, what the value of this new canvas will be on the market. The "younger" portrait seems clearer, and somewhat incomplete in comparison to the Mona Lisa. The detail and background scenes are basically sketched in, though there seems little ambiguity with respect to the essential composition itself. The figure is posed precisely in the same position, and the subject is clearly the same woman. The newer painting has none of the delicate translucency of textures and surfaces of the original. Both seem works of absolutely mastery, though the newer one might be considered to be somewhat less refined in its presentation--perhaps consistent with the youthfulness of the subject.

I have always been more impressed by the modeling and glow of the sitter's hands, which seem so real that blood flows under the skin. They are angel's hands. The face, which has always seemed quintessentially Italian, is not beautiful. The beauty resides in the artist's evocation, such that the spirit of the woman has been summoned by the skill of the artist, and she peers through the centuries into the looker with a power that transcends inert matter, through the cracks and fading and toning of time, to make a deep and vivid impression.

The dialectic between the meaning of the subject, and the intentions of the artist, has always been a major preoccupation of writers and critics over the decades. It's an enigma for which there will never be a final, conclusive answer. Artists have routinely made "celebrity portraits" of the gentry, balancing their interest in the commissions with their disinterest in the characters of their subjects. In every sense, patrons of serious artists were merely stand-ins. But in this specific case, the intensity and revelation of method lead us naturally to impute deeper levels of significance to the result. What did Da Vinci really think about this woman, Lisa Gherardini? Did he intend that this specific portrait should carry levels of meaning that no individual subject could possibly fulfill?

The story is that he may have worked for years on it, perhaps setting it aside for some years, then returning to it again to further improve it. But the appearance of this new canvas complicates the story in several inconvenient ways. Does it somehow de-value the known work, by making it a kind of grand aesthetic experiment? Certainly, investing that much labor and thought and deliberate research into the process tells us that it was more than simply a painting, a casual diversion. It holds all the pressure and drama of the force of devotion, the commitment of a man of superior feeling and sensibility to attain an unique artifact of the evocation of human nature.
Posted by Curtis Faville at 8:58 PM

these Priceless Artifacts hanging around on various &
sundry walls ... let us pre and go to the Museum Store and buy an-other post-card.

I was watching this when
a Magnum P.I. episode came up on the COZI channel...

I bet Tomas Magnum could solve this who-Done-IT mystery... in less than an hour.... and then: move on ?

When Merry and I were in Paris, we walked by the Louvre, but decided we didn't want to spend all day in long lines waiting to see masterpieces, so we skipped it.

I think there is something anti-climactic about seeing iconic paintings.

I was, however, very impressed when we saw the Pollocks at the Tate in London in 1999. The transitional canvases he did BEFORE the drip paintings were really great--lush metallic and flat dark toned studies, about 2x3 feet--strong abstract constructions. The more I see of his work, the better it seems.

on the way to Greece in 1968 I did go into the Lewvre
no crowds then.... except for those three cute Swedish girls
who took me

straight into the Egyptian section..

I did see the Moana Lisa... as I recall

it was much smaller than I had IMAGINED...

check out what Robert Duncan has to relate re: Pollock.... in that interview: A Conversation About Poetry and Painting

and I telling you...

"we" are talking/speaking of PAINTING and not

there is much more more-so of Pollock that those "drip" things....

he stood in the CENTER of what he was doing.... actually in the center of his canvas-as...

KP: Open form comes close then to the Abstract Expressionist idea that you finish when it stops, i.e., there's a point where the process itself takes over.

RD: Right. I actually got to see Jackson Pollock painting one of those great canvases. It must have been in the 50's. Marjorie [McKee] parked me at Lionel Abel's house, and he went and talked to Jackson Pollock all night, telling Pollock what I was doing while Pollock didn't pay any attention. What struck me again and again was that Pollock was in the middle of the painting, literally in the middle - not in front of it or in back of it, in the middle of it - and that's the way I feel in a poem too."

hell's bells... that the way I feel too.... especially when writing painting or painting writing,

aint n-never ever a valid consideration

I guess that the ModSquad Internet-is-everything Morons
will Google Jackson Pollock and DISCOVER that he was no PoDunk "trickster" they just might find that he/ his productions devolved (or evolved?) from some serious Surrealism ? I mean... jus look to who his major
"teacher" was: Clyfford Still

now that i am Olde... and have my own (limited-such-as-it-is) vocabulary I
just might look into Pollock... and Still and read some Duncan... well, maybe, when I have less time?

Well, you know what they say: