The media has been fawning over the Royals--who haven't appeared in a World Series since 1985, the year I spent in Northern Japan, listening to Curt Gowdy (piped in on American Service radio) crow over the exploits of George Brett (who would eventually end up in the Hall of Fame), and Bret Saberhagen (20 game winner (and Cy Young winner) that year at only age 21).

After the Giants had silenced the true blue crowd at Kauffman Stadium in the first inning with three quick runs, Bumgarner went on to tame this obstreperous bunch of upstart rascals, holding them to four hits and one (home) run. 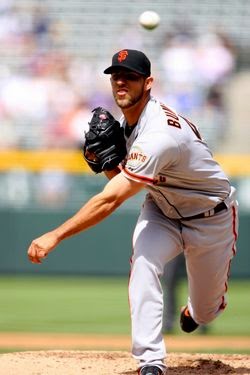 Bumgarner's ascendancy to the pinnacle of major league pitching glory has not been unexpected. Raised in rural Hickory, North Carolina, sleeping in the loft of a log cabin his father built, he set the regional scholastic sports world afire, excelling at both pitching and hitting, establishing benchmark records wherever he went. Known early on as a "country hard ball" pitcher, he eventually developed other pitches to confuse and frustrate opposing batters. At 6'5" and 235lbs, and with an easy wide slinging three-quarter delivery, he is usually good for seven or eight innings with little apparent strain, and he brings a strong, centered concentration along with his impressive physical skills. He doesn't "over-think" or let things get him down.

Almost three years ago,  I noted the changing fortunes of the Giants' pitching staff. Then, Tim Lincecum was in the midst of an incredible run, having garnered consecutive Cy Youngs in 2008 and 2009. He seemed on queue to set career marks in strike-outs and winning percentage in the annals of Giants' club history. That same year, a young Madison Bumgarner was in his first full year in the majors, and he was already beginning to be noticed. That year he went 13-13, with a 3.21 ERA, and 191 strike-outs. The amazing part was that he was only 21 years old.

Lincecum had broken in at age 23, and had his first full year in 2008.  This year, at age 24, Bumgarner has already won 67 regular season games, and is considered a "veteran" of the post-season, having participated in both the championship runs of 2010 and 2012. Saberhagen, whom I mentioned above, went on to have a wonderful--though not perhaps consistently great--career, eventually going 167-117 over sixteen seasons, winning a second Cy Young in 1989, but having a mostly so-so steady decline after that.

Previously, I noted that a pitcher like Lincecum, somewhat slighter in build, and with a "haywire" motion that was prone to disequilibrium and fatigue, and who depended on velocity rather than variety and control, was unlikely to have a long career. Bumgarner, in contrast, was big, strong, with an easy delivery, and possessed stamina and an emotional level that boded well for the long haul. These are all clichés, of course, in baseball parlance. The actual performance of a pitcher who possessed all these attributes might be mediocre, or even sub-par. Most professional athletes have very strong bodies, and determination to match. These qualities, by themselves, don't make great athletes.

But it was apparent, to anyone who noticed, that Bumgarner was potentially a Hall of Famer, in the mold of Warren Spahn, Randy Johnson, and Steve Carlton. Fifteen years from today, I would expect Tim Lincecum to be but a fading memory of a young phenom ("The Freak") who had four years of flaming glory and then quickly petered out, while Bumgarner probably will go on to win over 300 games, and a couple of Cy Youngs into the bargain. Astonishingly, he's still only 25 years young. He's hardly begun.
Posted by Curtis Faville at 11:30 AM