The idea that the way we feel about a work of art, is as important as what the work may be said to mean, is a post-Modern critical notion--the idea that the reader, or viewer of a work can determine both the meaning and significance of the work, or that they are (each is), in effect (a) participant(s) in a process whose reality is never just one-sided, but a shared phenomenon, is anti-Platonic. Works of art, as this sense imagines it, do not exist in a pure state of eternal durability, but actually change based on the way we see them or think of them. Ultimately, they may be forgotten and neglected, disposed of. Works of art may "live" only so long as they are perceived, and appreciated. Once they no longer are, they cease to exist--they're no longer in the pure realm of spiritual eternity.

I've never thought of photography as a spiritual art, but occasionally it does occur to me that photographs may aspire to a condition of solemnity or reverence which we associate with religious feeling. The problem with religious notions of artistic meaning and value is that they inevitably devolve into formulaic interpretations related to the iconography of any specific faith. All faiths may be said to share a focus upon the divine, the eternal, the immutable; but beyond that, it isn't easy to make useful generalities about the religious applications of meaning to art.

Much of the art of past centuries has been deliberately conceived within religious contexts. In our time, so-called "profane" or secular art has been in the ascendancy, generally since the beginning the Enlightenment (the Renaissance) in Europe. Critical theory over the last two centuries has preoccupied itself with building justifications and interpretations which are essentially non-religious in character. Beginning in the 20th Century, in the West, artists and scholars have begun to explore and examine the relationship between certain Eastern religious systems of thought and worship, and their artistic expressions. In the West, many artists now claim Buddhism or Zen Buddhism as inspiration. It's become a kind of commonplace for artists to claim an Eastern religious sense in their work and lives.

Previously, I've commented on the work of Minor White, and Paul Caponigro, both artists who explicitly refer to the mystic spiritual element in their work. These two influential photographers explain their work in terms of extra-formal themes, and how a rational, deliberate intention is only one component of a process that has mystical, involuntary, even passive elements, of subjects and occasions "choosing" the photographer, of being "moved" by unseen forces or spirits to act. The part that craft and knowledge and intention play in such a process is obvious. It's the extra-rational dimension which is claimed as crucial. 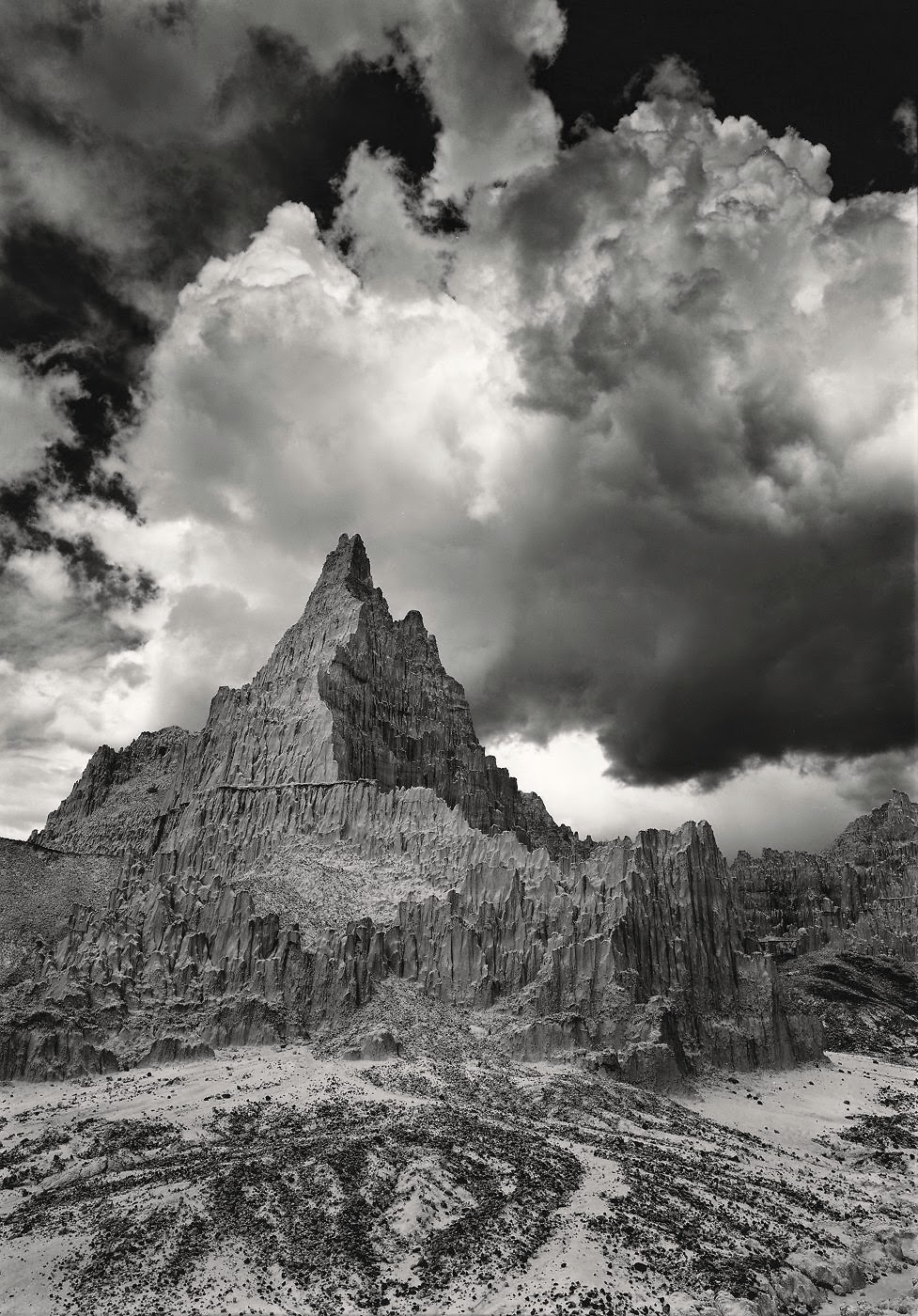 I first encountered the work of John Wimberley in galleries during the late 1980's. He hadn't published any books at that time, and his reputation was rather "underground." What was clear was that Wimberley had a powerful vision, a studied view of large-scale landscape, though in most respects his subject matter was no different than many of the well-known West Coast landscape photographers. It was how he saw this subject matter that made his work different. It was "big" in the same way that Adams's or Baer's is, but it was more narrowly focused on certain telling details--the position of an odd cloud shape in the distance, the unresolved tension between ambient element in the composition, the eccentric angle or diverting angle emphasizing an abstract form. It was clearly an attempt to revive the aspect of intention in photography, not merely as a kind of passive awe at nature's grandeur, but as an act of deliberate recognition. The images weren't attempts to foreground an ecological ideal, or an elegiac ode to lost opportunities, or an evocation of an earlier nostalgic past.

On the other hand, they weren't coded abstractions meant to signify "koans" or touchstones of spiritual potency, the way Minor Whites often seem to be--or so I've believed.

What we do see, primarily in Wimberley's work, is the evidence of geology, and weather, and occasionally, the meek evidence of man's impact on the landscape.

Three earlier works seem to be emblematic of Wimberley's approach. 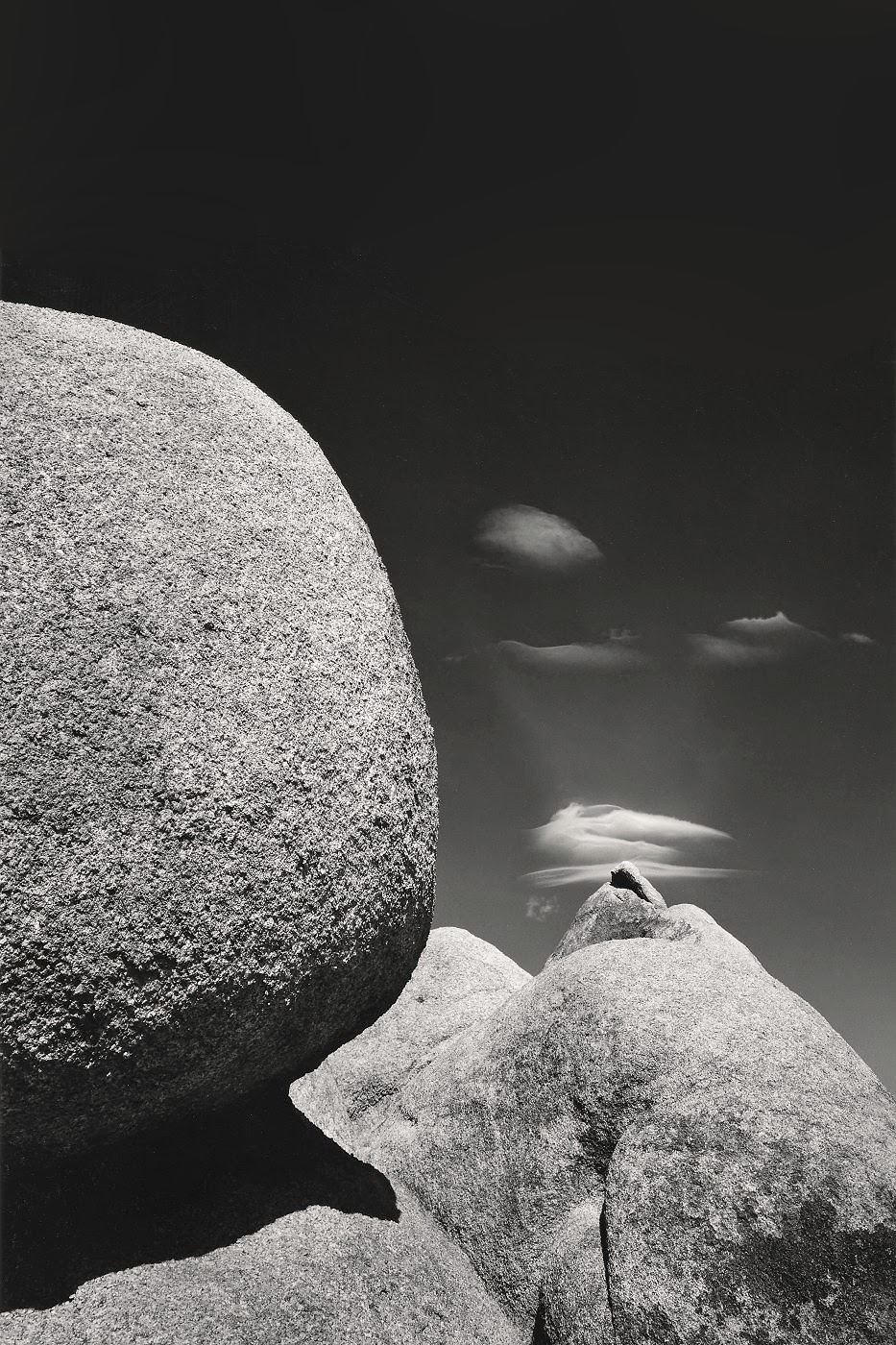 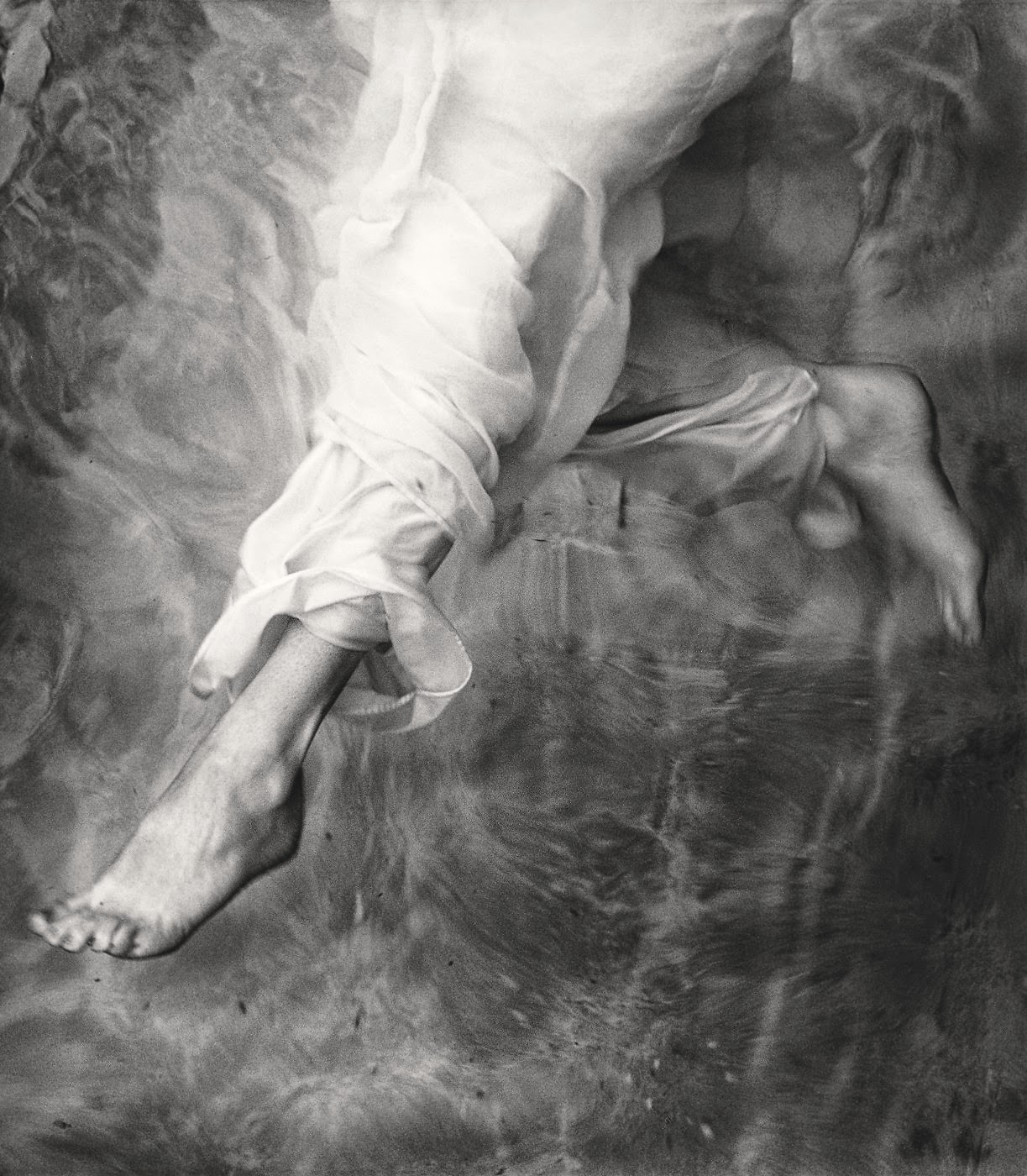 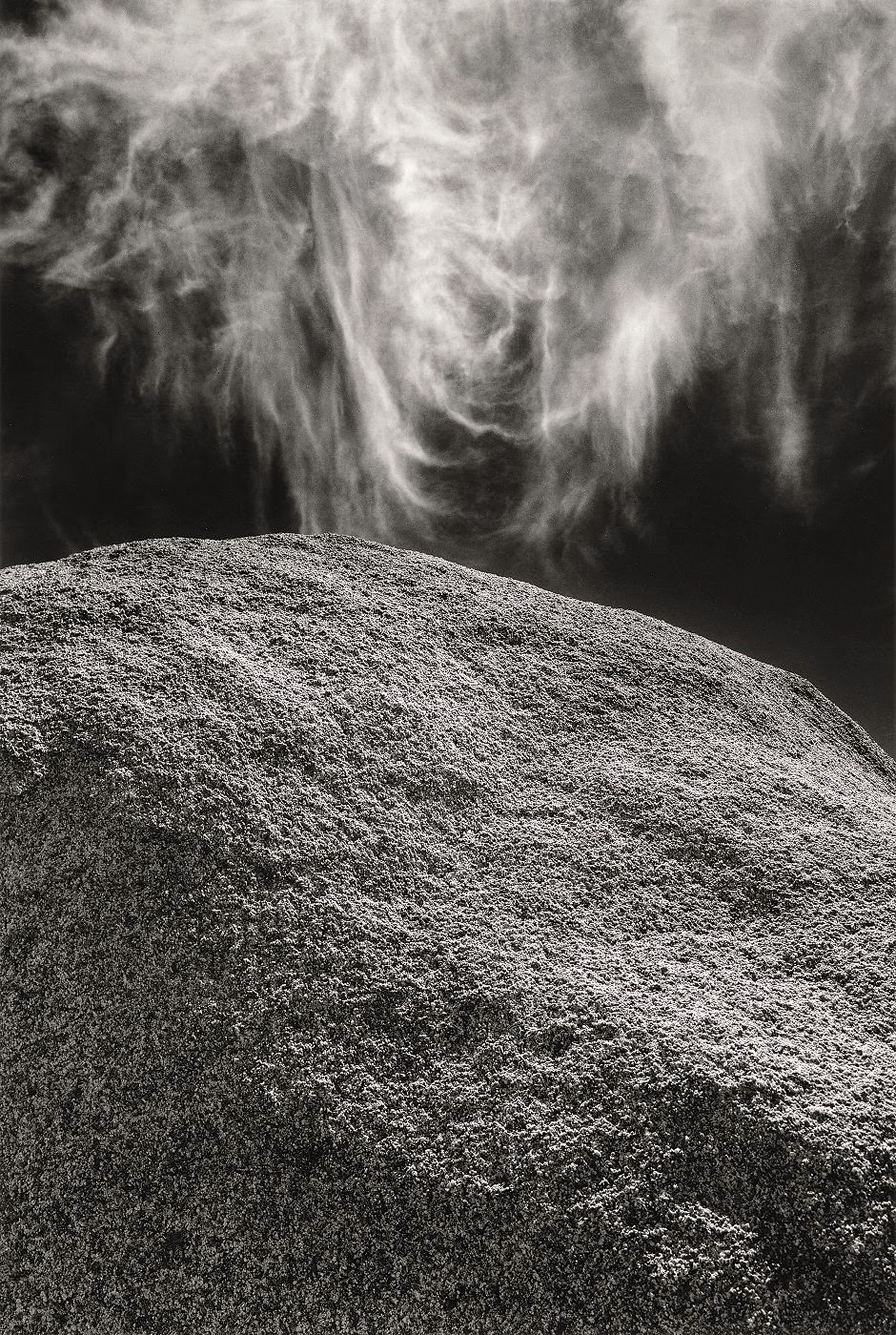 Though these images have probably now become rather generic in their approach, at the time they seemed quite novel and innovative. Technically impressive in their clarity and formal construction. Contrasting textures and shapes which imply meaning without insisting upon themselves--moments stolen from accident and opportunity.

In Leda's Landscape, does the large oval rock on the left symbolize one of Leda's eggs, from the Greek myth of Leda and the Swan? Is the dark crevice in the distance the beak of a bird? And what is the meaning of the cloud shape placed suggestively upon that point? 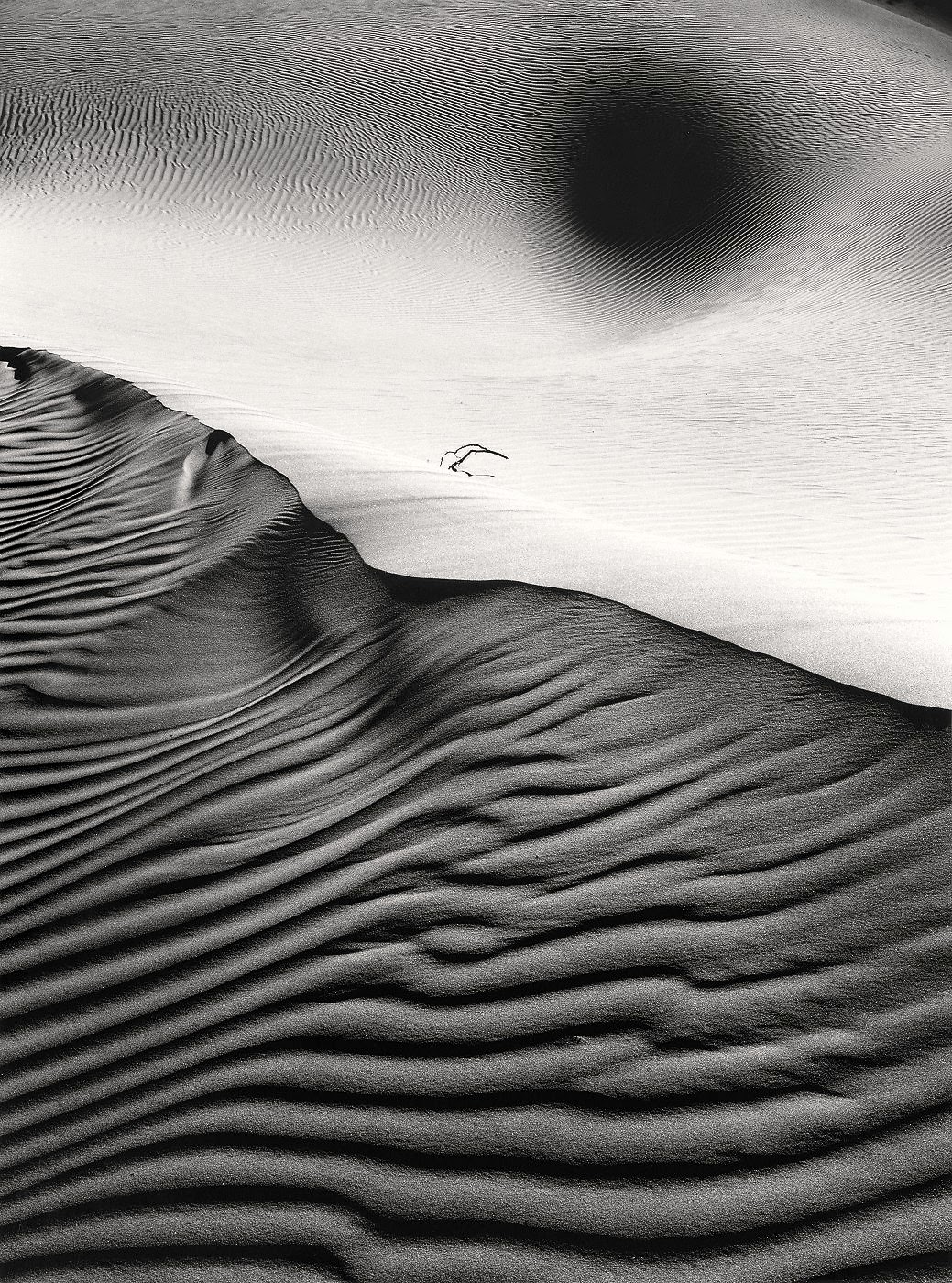 As connoisseurs of the image, we are free to deduce whatever meaning we choose from a given image. Since the photographer has not chosen to title the work with a narrative queue, we have no hint what its ultimate significance is. With dune imagery, I often find myself working within a dialectical range of "hot" and "cold" for light and dark, though certain kinds of temperature may be darker where hotter. Is it a "black hole"--from the astronomical realm? What do black holes say? A mysterious concavity which draws us inward towards an unknown eventuality? Will we disappear into a bottomless void? Or are these speculations all beside the point? 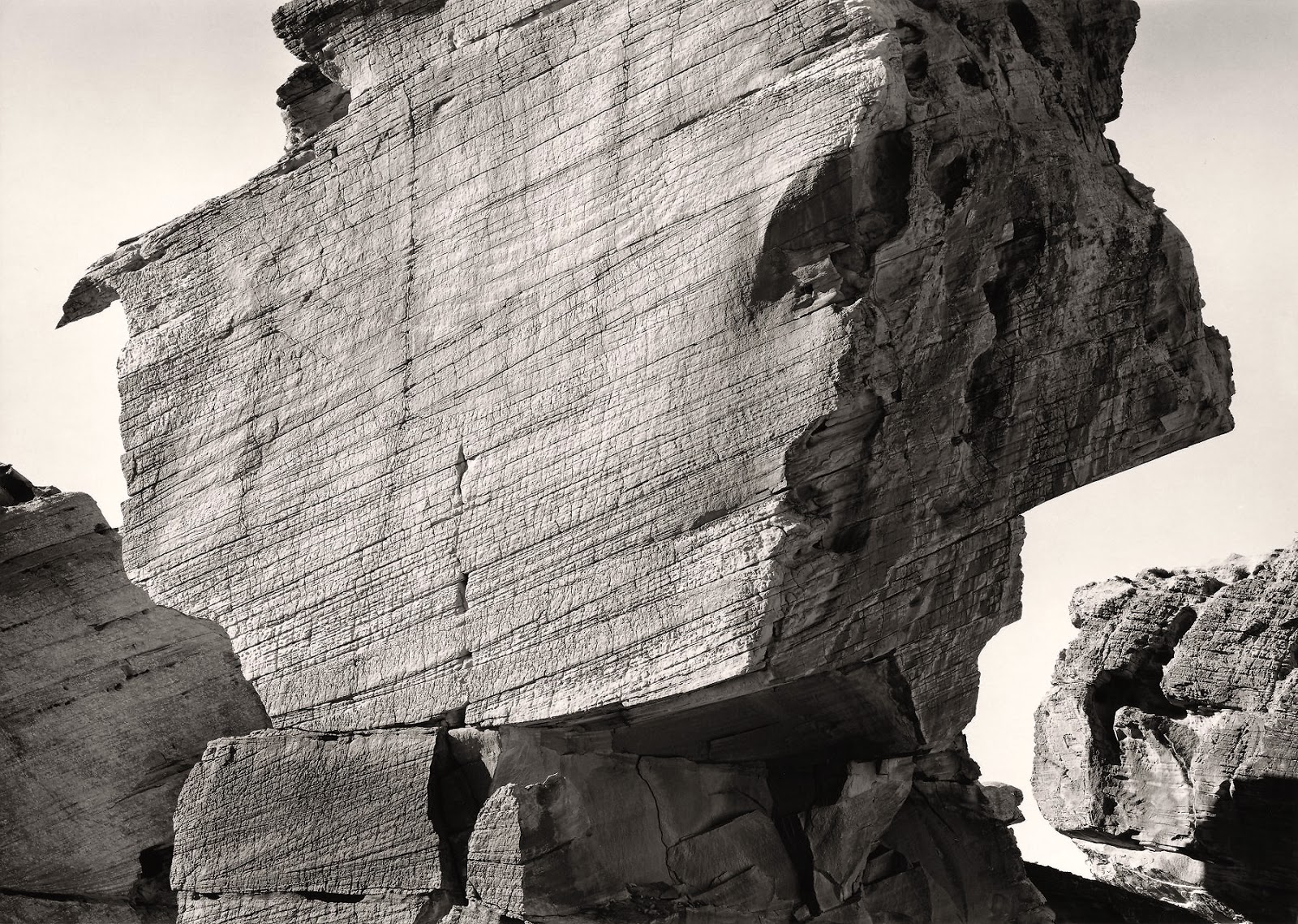 Images which foreground the over-arching scale of natural structure are usually seen as signifying nature's power over man. I love pictures like this, which suggest a delicate balance of great forces held in check, subject to geologic time and coincidence. The great face of rock, streaked with the layered depositions which predate our genetic evolution, is like a Rosetta Stone whose ultimate message is locked inside a language which we haven't yet deciphered. Its gaunt presence is monumental--but monument to what? 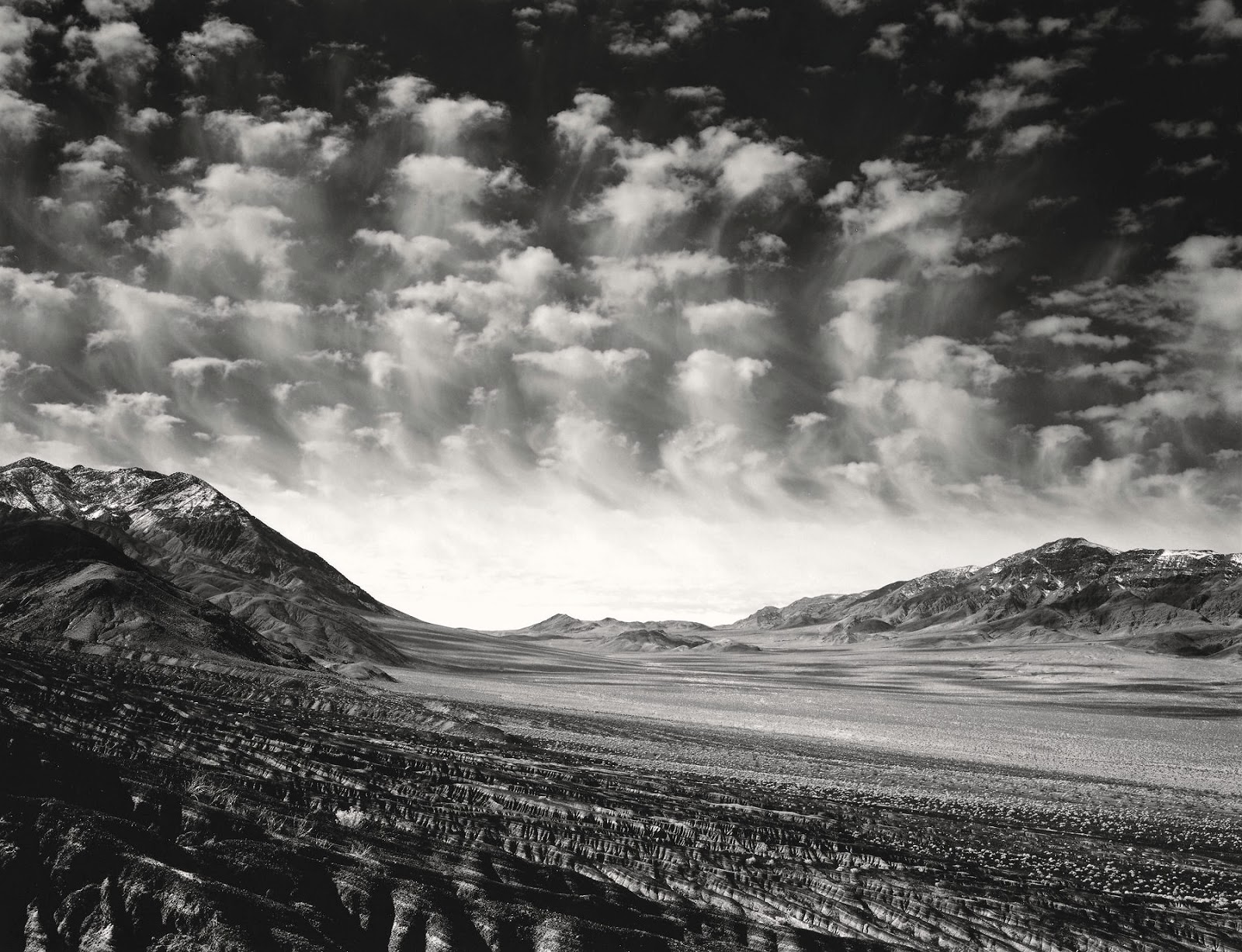 My first impression--as a photographer, looking at this image as a potential in the field--is that it's a happy occasion. Clouds like this are uncommon, though they may hang around longer than billowing cumulus do. In dry country, they often undergo very gradual transformation, and permit the set-up of a favorable foreground. Attaining this vantage may have been difficult or easy--but the difficulty, no matter how problematic--isn't the point. We aren't impressed with the effort, only with the phenomenon.  As with many of Wimberley's compositions, there's a play of textures and effects. The cloud formations, which suggest a school of hammerhead sharks, or a field of wild flowers, or perhaps a host of angels (take your pick, or invent your own metaphor), contrast effectively with the yawning stretch of gradient between the vantage and the horizon line. It reminds me a little of some of William Clift's landscapes. Also, the gravity of the earth's downward slant pulls against the upward lift of the cloud shapes, trailing their tails beneath them--contending visual forces in a barren scene without much evidence of life. 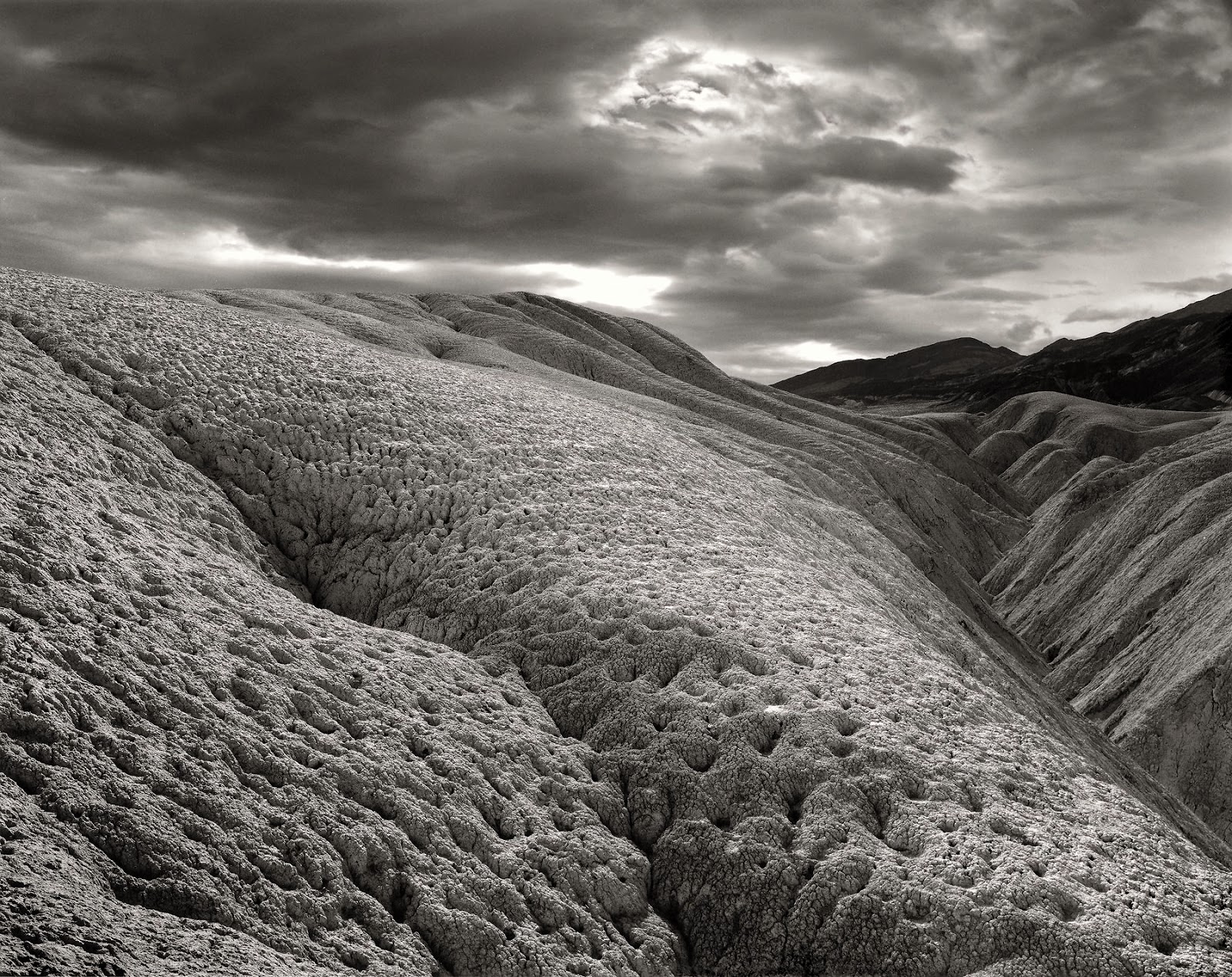 Many of these images benefit from larger scale reproduction. So I would encourage anyone reading this blog to click on the images and expand them to the limits of your screen to see what I'm getting at. 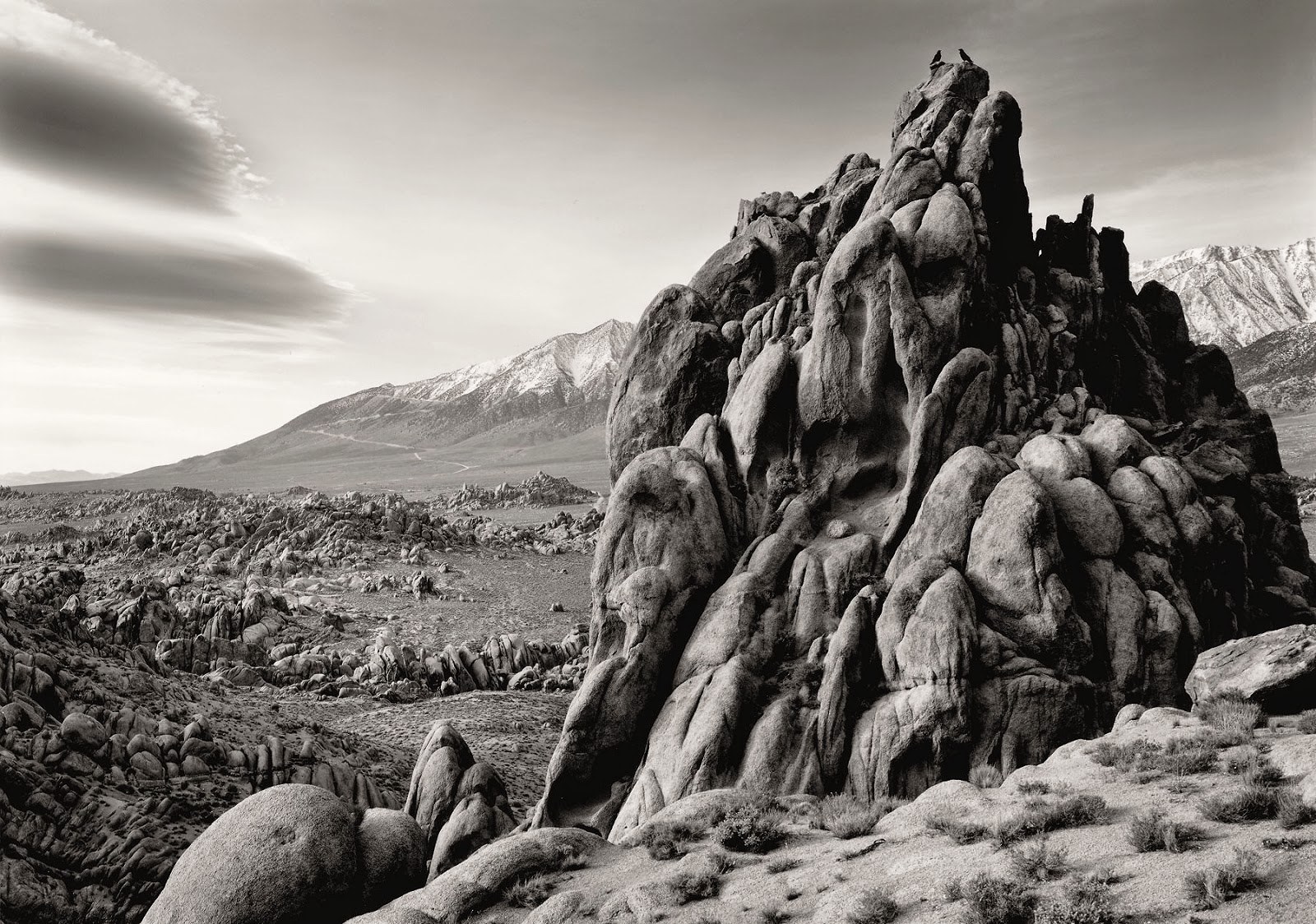 Unlike Brett Weston, whose work I have always felt strongly about, Wimberley isn't simply looking for "elegant gorp." His sense of landscape is much more purposeful and connotative. He sees correspondences between abstractions in earth, plant matter, and cloud forms--and the messages which he feels conveyed through his imagination. These messages may not be shared by the viewer, but perhaps that isn't necessary. The mere suggestiveness of his images may be enough to carry the burden of a meaning.

Recently, he's been on a quest to capture images of Native American petro-glyphs throughout the Great Basin territory. Though I respect the project, I question the relationship between the specific glyphs and the landscape compositions that foreground them. It seems to me a kind of gratuitous pretext. On the other hand, it can be very haunting to imagine a man, perhaps two or three or even five hundred or more years ago, standing at the exact spot, scratching away on a rock-face, seeing essentially the same unspoiled, and somewhat desolate, view we can capture with our cameras. The evidence of that intention is as permanent as anything that distant character might have imagined. What would he have thought of the photographer, with his big view camera perched on a wooden tripod, peering out from under the focusing dark-cloth? A time-traveler from another planet?
_______________________

All images used with permission of the photographer.

Very beautiful work, by John. I have always enjoyed his work.