Can anyone be a fair judge of their own artistic effort? Writers and artists run the spectrum of attitude, from vain boastfulness and pride, to quiet modesty and tact. Courtesy suggests any artist must refrain from indulging in too much self-promotion; whereas a real confidence may express itself as passive acceptance of the judgment of history and the marketplace. A jury of your peers has a nice ring, but we know that fairness and justice are seldom the driving forces of prizes and grants and praise. I've never been shy about offering my aesthetic opinions. Some people believe, apparently, that artistic endeavor is already so difficult, that negative criticism should be avoided, to protect the tender sensibilities of those who might be unable to handle rejection.

Any honest craftsman welcomes criticism, which may help to define meaning and effect, and guide further development. But trying to see your own work, objectively, requires a special kind of disinterestedness. Am I willing to subject myself to the same standard that I set for others? Can I apply a higher standard to myself than I maybe aspired to? Am I willing to admit to myself that my standards weren't high enough, or that I fell short simply because I lacked the inherent talent from the beginning? These are uncomfortable questions which any artist or writer faces, even if they never discuss them in public. Ultimately, any serious critic must insist that merely trying is not enough, and that failure must be a possibility in art, as it is in life. In the arts, "A for effort" can't be on the menu.

My photographs clearly belong to a tradition of "straight" image making that has its origins in the 19th Century--Timothy H. O'Sullivan, William Henry Jackson, Edward S. Curtis, Darius Kinsey, Robert Adamson, David Octavius Hill, etc.--which then evolves fully in the 1930's via the f64 Group, which included Adams, Edward and Brett Weston, Cunningham, Van Dyke, Lavenson, etc. For a time at the turn of the 20th Century, so-called "soft image" work was favored, partly out of deference to the "artistic" qualities of painting, which was ironically undergoing its own formal crisis in reaction to the invention of photography. Just as straight depiction in painting was beginning to disintegrate, photography was finally throwing off its painterly preoccupations and declaring accuracy and vividness as its chief values. If photography could achieve the verisimilitude of "reality," painting could be free to explore other spheres of expression. 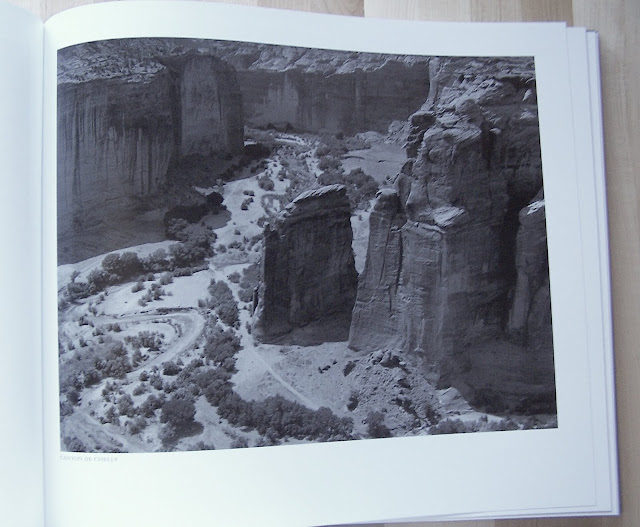 By the time I'd entered the field in 1985, serious large format photography--primarily black and white, but moving inexorably forward with color as well--had been accepted as a valid art form. The high art values achieved by Strand, Edward Weston and Ansel Adams in the 1940's/'50's and after, were commonly accepted, and all the major museums in the Western World now mount photographic exhibitions right alongside the plastic media. 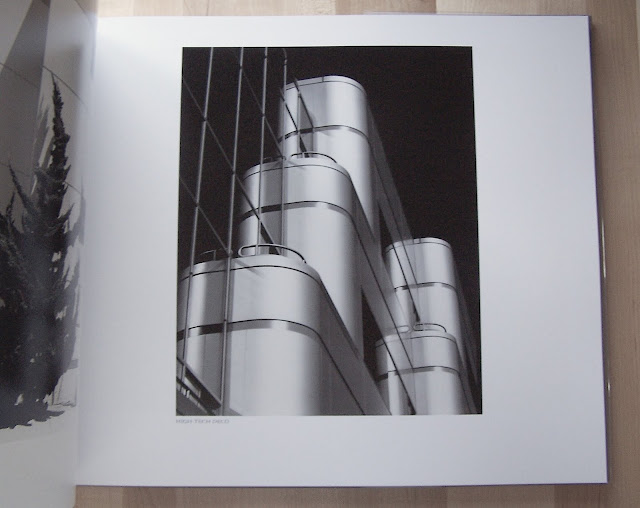 For many years, there was a debate about the value of photographic prints. In theory, any photographic negative may be endlessly reproduced (printed). In fact, it's nearly impossible to make so-called "identical" prints through individual exposure and development, even assuming that materials (paper, chemicals, etc., which may be proprietary or privately concocted) are uniform to begin with. The simple fact is that producing more than a handful of superior prints is difficult. In addition, any successful photographer knows that control of an edition is part of the process of controlling the value, particularly with very popular images. Once a photographer closes a print run, or dies, the number is fixed.

As I have mentioned, my own working methods were determined in part by my expectation. I never imagined that my work would ever be shown in galleries, and I could see no particular reason to have multiple prints (mounted or not) of images. Once I had achieved a print that satisfied me, I stopped working on it. Usually, I ended up with only 1-3 prints of a satisfactory image. I never expected my prints to "sell" anywhere, so there seemed no point in have additional ones. Was this an expression of my artistic "modesty" or simple pragmatic efficiency? Perhaps laziness had something to do with it. 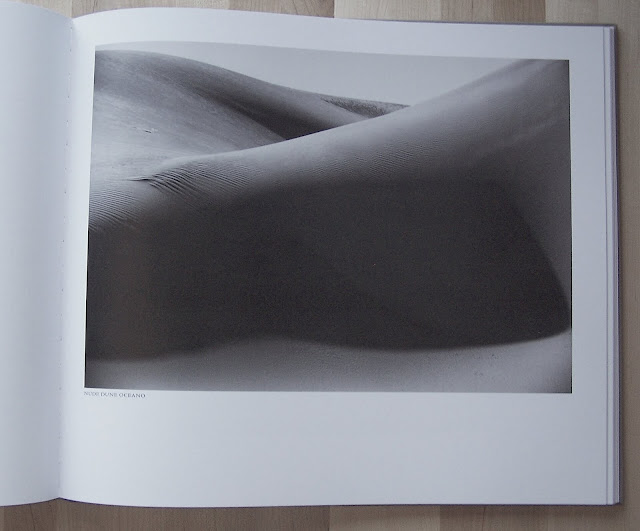 Ansel Adams once said, acting as the promulgator of his medium, that "the specter of the hobby is always lurking" behind every amateur photographer, by which he meant, if I read him right, that most people stop short of realizing their full potential photographers, simply by shirking the challenge, excusing their reluctance by calling it a pastime (or a "hobby") instead of the art it can be. It's like a conscience call.

By moving up to larger and larger negative formats, I believed that I could achieve greater accuracy and tonal scale in my work. It was also upping the ante, a commitment which the larger and more demanding (and expensive) equipment would enable. Could I have achieved my goals with smaller formats? Probably not. I had seen how even a 2 1/2 square negative would blur even at 8x10 dimension. "Blow ups" were fine, as long as you didn't get too ambitious. But I was ambitious! I'd seen what Adams and Weston could do with 8x10, and that's the potential I wanted to test in my own work. I didn't exactly want to make photographs just like theirs, but I knew that this was a journey I wanted to take, even if it resulted in failure.

Photography is forgiving enough, that if you use the very best equipment, and the best materials, the odds are that you'll make work that may impress people. 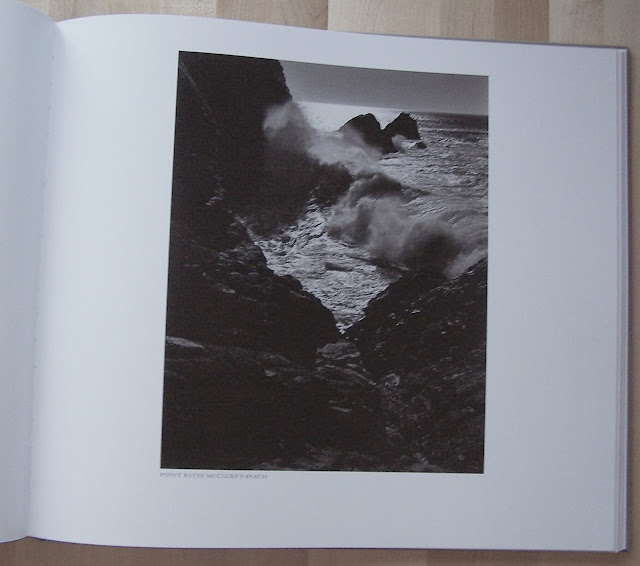 In truth, I was more than willing to let the large format images I knew I could achieve, stand in the beginning for what I wanted. Standing on the rim of Canyon de Chelly and blasting away at the canyon walls below may have been like shooting fish in a barrel, but I couldn't resist the lure of the iconic. And the really big 11x14 negatives I could make, would guarantee that my contact prints would be at least as impressive as any smaller format versions. The greater challenge, naturally, was in finding compositions that were completely original, and not just later examples of the same subjects.

Harry Callahan said that a good photographer was never more than 10 feet away from a great picture. But accepting that as an aesthetic axiom does not necessarily imply that one should be limited to that range of possibility. There are landscape photographers who wander the world restlessly for any kind of exotic picture, even hiring bush pilots and helicopters to get them into the right position or remote location. Both extremes--resisting the exotic, or embracing it--seem unnecessary to me. I think it's possible to construct compelling photos out of arrangements of objects in a room. But that doesn't imply that hiking around the Alabama Hills on the eastern side of the Sierra Nevada isn't also a fruitful approach. 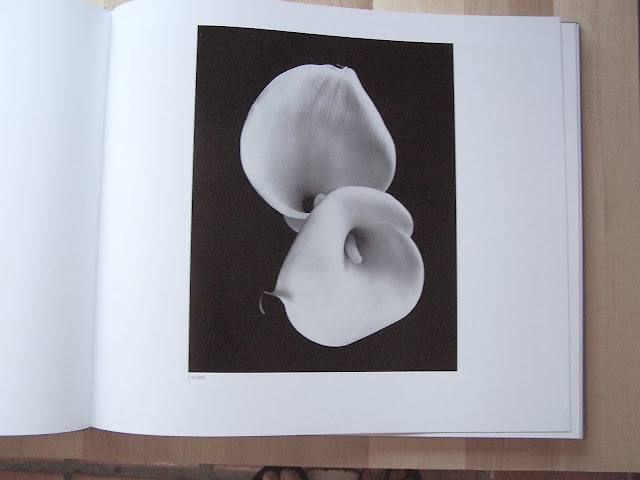 Serious landscape photographers may think of themselves as pioneers, in much the same way that Timothy O'Sullivan was, in the 19th Century. Though the rigors of the outback are nothing like they were in his time, with mule-teams to carry his baggage, there is still the excitement and pleasure of being outdoors, away from "civilization," on the hunt for the wild, untamed, unspoiled natural wonders. That may sound like a cliché, unless you've hiked five miles with a 30lb. view camera on your back, carrying a 12 lb. wooden tripod up a steep trail to a promising overlook. 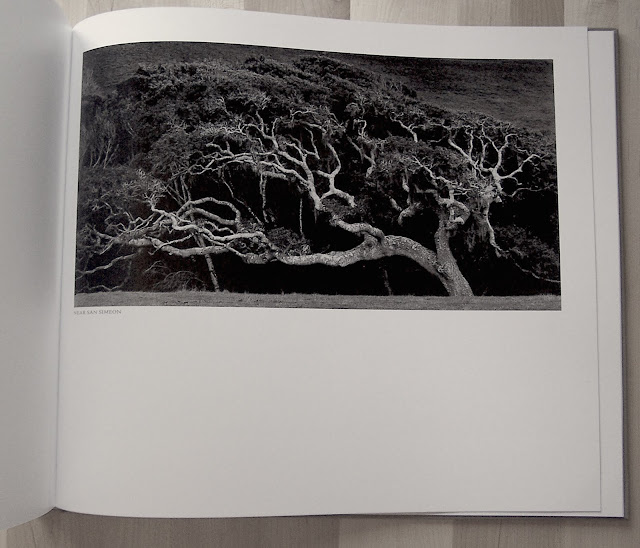 Though many of my photographs are of classic subject matter--compositions that others have essayed, with greater or lesser success, I think that most of them deserve to be appreciated. My images all have a strong sense of organization, a sensitivity to context, as well as a respect for traditional pictorial values. They aren't humorous. They aren't kooky. They don't strain for effect.

As a conservationist, I have a preservationist's concern for the environment. Some photographers are willing to allow their art to reflect the devastation man has caused on the earth. Robert Adams, Lewis Baltz. There is pain in their photographs, and disgust, and outrage. Even hopelessness. Is it apposite to use your art to make deliberate political statements with your camera? No doubt. But the choice to do so will subtract from the opportunity to appreciate what we most value. Probably the best expression of preservation for a fisherman is not to fish at all, and to insist that no one else does either. As a fly fisherman, I am sensitive to the use I make of fresh water habitat, but the point is to live, not refrain from experience, either as a protest or as a sacrifice. 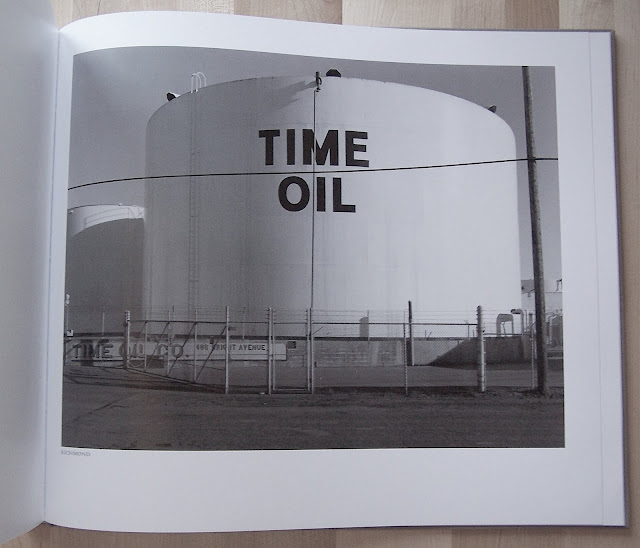 For me, no photograph could be "merely" pretty and be truly compelling. There must be an underlying mystery, a quality of power or eccentric design which keeps us looking, keeps us coming back, to attempt to unravel what's intriguing to our eye. Though oil storage tanks--big cylinders full of raw or refined petroleum--aren't pretty, I thought that the message implied here by the oddly named company logo, with the criss-crossing grid lines unintentionally setting out an ironic pattern of mathematical meaning, told me something about the world. This photograph was taken with an 8x10 view camera. It could obviously have been snapped with a 35 millimeter hand-held, and the resulting "content" would be the same. But for me, the importance of the "message" of the picture was enhanced by the clarity and crispness of the accuracy of the lens. People who wander about with little hand held cameras, snapping away happily, are missing something.

One of the best aspects about large format cameras, is the methodical routine you go through to set up for a shot. It involves a sequence of decisions. Nothing worth doing in the arts is really easy, and much of the inconvenience of large format photography is really an imposed discipline. It forces you to think about depth of field, about vantage, and about the ambient conditions. Though there may be occasions when time is of the essence--when the available light or transient shadows are fleeting--in general the best photographs occur under conditions of calm pursuit, allowing the unfolding process to dictate what your desire can realize. And then there's luck!

You have to be ready to experience the unexpected. Interesting photographs often become possible under changing conditions, and these may occur under unusual or hazardous conditions. One of my best photographs was taken during a dreary rainy morning in Tilden Park, when the light was drab, and my equipment and I were getting wet. I almost had no idea what would come of this picture, and for some years afterwards, I was uncertain about whether it was a good photograph, or not. But people I showed the image to, told me it fascinated them. The tree trunks almost seemed to be translucent! I just want to say, very quickly, that the book is a very beautiful object, and the photographs are often mesmerizing.

There's more to say, of course, but not now.