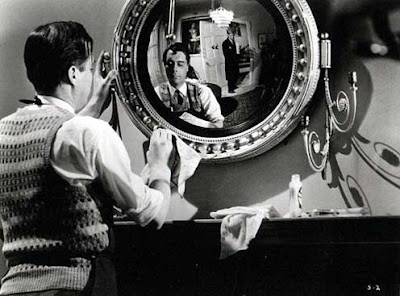 I am not a theatre-goer, so my familiarity with actual live performances is quite limited. Harold Pinter [1930-2008] was for half a century Britain's preeminent playwright, eventually winning the Nobel Prize in 2005. A further admission would be that I have never read the novella, by Robin Maugham, upon which Pinter's screenplay is based. I don't believe that either qualification is an issue in voicing my appreciation for this movie, however.
The Servant came out when I was only 16. I believe I saw it first in the late 1960's, in a showing at an art film revival theatre in Berkeley. The Servant was, even then, regarded as an "auteur" classic, a clear example of a certain kind of gritty, hard-edged British New Wave cinema, associated in my mind with Darling [1965], The Loneliness of the Long-Distance Runner [1959], Room at the Top [1959], and so on. It was the first dramatic piece I associate with Pinter, who had already, by this date, written eleven major plays, though his screenwriting activity had barely begun when he did The Servant. What an auspicious quasi-debut!
Ostensibly, The Servant is a "vicious" attack upon the British class system, though this initial framework becomes, in Pinter's hands, merely a pretext for a deeper exploration of the nature of the sexual bargain, of the sly, subtle adjustments of interpersonal tension, a theme that is far more universal in its implications than mere social criticism.
A full analysis of the film easily would take 30 pages of dense ratiocination; all I can reasonably expect to do is point out a few thematic elements which I find intriguing.
This is, in my mind, one of Dirk Bogarde's three great screen performances, the other two being Darling, and Damn the Defiant [1962] (a little known historical potboiler about a mutiny aboard a British ship of the line during the Napoleonic Wars). Bogarde had begun as a Sunday "matinee idol"--his delicious, boyish good-looks and slick charm conquered the popular movie-going audiences of the 1950's. As his career progressed, he got better roles, and by the end of his life, was regarded as one of the major actors of his era. Physically unimposing, he tended to pout and sulk in his roles, plotting and devising against against power and circumstances to attain his ends. These modes of performance are nowhere more evident than in The Servant, in which he plays a manservant hired by a stuffy, presumptuous, adolescent young architect taking up lodgings in London after a period abroad.
At its essence, the plot is the story of the seduction, and eventual domination of the young British upper-classman (brilliantly played by James Fox) by his servant Barrett (Bogarde). By "seduction" we must be careful not to place too great a generalization upon the "sexual" implication, since in Pinter's universe, sex is not the end of the bargain--it's just one of the playing fields. There is a highly suggestive dialectic between Fox's relationship to his girlfriend (played by Wendy Craig), and the relationship between Barrett and his girl Vera (Sarah Miles). Pinter seems to be telling us that at its basis, all sexual and/or "contractual" bargains which people make--whether temporary or not--are selfish, provisional, extemporaneous. The difference is in how we pretend: Fox and his girlfriend are no less ruthless and smarmy about what they expect of each other, and how they view their presumed "inferiors"--than are Barrett and Vera; it's just that the "servant" class takes for granted the pragmatic nature of human relationships, which are, as often as not, built upon money and class and "tradition"--and not love and cooperation.
The movie is in some respects quite theatrical in its technique. I'm thinking of one scene in particular, in which Tony (Fox) and Susan (Craig) go to visit with Susan's parents. The camera view into a "conservatory" or living-room sets the four figures "posed" like marionettes, stilted and formal. The conversation is like a drawing-room comedy, with arch condescensions mounted like stuffed busts in every phrase. It's like suspended animation--these people are ghosts acting out a dead tradition, their belief-systems hollow and echoing.
As the steady deterioration of Tony progresses, their pre-set roles and etiquette are increasingly simplified, until, in the end, the two are like schoolboys, playing ball and hide-and-seek. Barrett hooks Tony on drugs, gets him screwing his girlfriend (prostitution), and eventually totally compromises him. Tony reasserts his class superiority temporarily, but then reneges and re-hires him. Barrett's victory is pyrrhic, of course, since his "control" of the household is limited--it's all ghastly fun and games. The message seems to be that all social relations are a kind of gaming, it's just that the rules for different games are different, though the ultimate outcomes may to some extent be pre-determined. Barrett is ruthless, and appears stronger, more practical--but socially he's still impotent. Every victory is met with capricious resistance from Tony--ultimately it's teasing and coyness that dictate their games.
Pinter is incredibly pessimistic about human relations. People are selfish, and will use anything to advance their interests. Self-pity and disingenuousness and posturing and bullying are the currency of exchange. We barter and sign up for personal gain, but we always are testing and re-testing the limits of our tolerance. Cruelty and vicarious curiosity dictate much of our intercourse.
How odd that a writer with such a compromised view of the human capacity for evil and mischief should have become such a strident critic of the fake sanctioned American interventions abroad. Did he really believe people are capable of better works?
Posted by Curtis Faville at 9:39 AM

The oddity remarked in the last paragraph appears less contradictory if you drop the unsupported conclusion that Pinter was "pessimistic about human relations." If The Servant is obviously about anything, it's about class relations, which are not necessarily universal or generalizable to all human social relations. (Although, of course, comparable vicissitudes may be apparent in any society dominated by money and ingrained power structures.) As a critic of contemporary life, Pinter may well have judged the underlying viciousness of the British class system and the overt viciousness of American foreign policy through the same lens.

As for "better works," take a look at Pinter's prose writing on cricket, a game that he loved from childhood on. His portraits of players he knew and admired are funny and filled with warmth and affection. In the end, "It's just not cricket" may have been his judgment regarding just about everything else.

Perhaps my remark about Pinter's anti-war stance is misplaced.

Certainly, any artist as ambitious and talented as Pinter is, in effect, if not overtly, optimistic about human agency--else why take the trouble to examine it and portray it with such care?

On the other hand, if you really believe people are, on the whole, not admirable, and probably not ethical, most of the time, then you must acknowledge their behavior as being, to a considerable degree, predictably bad.

I agreed with Pinter whole-heartedly in his criticism of Bush and Blair and the whole apparatus of unprovoked, preemptive, presumptuous warmongering.

just r e a d the plays.
make movies in your (own) mind of his writings/plays

Pinter "comes out of" The Theatre of the Absurd

the rest is opinion and politics...


The Caretaker... Mick (who is intensely concerned with him self) reveals:

I loved a movie that he scripted titled Turtle Diary. The original novella is by Russell Hoban, an American who has spent most of his career living in London.

You probably have seen it: it's two loners in London who decide to set free two green sea turtles from the London zoo in which they have been kept for thirty years (green sea turtles can live hundreds of years).

I mostly dislike British people (they seem arrogant and loud, and I hate their accent), but in this instance they are quiet introverts with actual minds, and they come off well.

The zookeeper conspires with them to get the turtles out, and so the suspense is a little lost, as there's nothing really at stake, as no one seems to care that the green sea turtles are the property of the London zoo. I think it would be better if there was some kind of chase scene with bobbies blowing whistles and doing a Keystone Kops kind of finale, but the film just pokes along, with a quiet loveliness.

The idea is that the turtles deserve to be free as they are legitimate legal entities being kept improperly by the state for the amusement of its People.

But once they've freed the turtles, the two (a man and a woman) can now move on to have sexual relationships (the woman sleeps with the zookeeper) and the man sleeps with a woman who works at his bookshop alongside him. It's like some kind of karmic reward for being eco-friendly.

It was a quietly optimistic film. I loved it when it first came out (mid-70s?) and recently watched it again. The notion of animal rights in it is very contemporary, so I'm not surprised Pinter would have been on the left in every other regard. I ws once very much on that side, but I now see the whole thing as a terrible fraud. I think zoos and aquariums do have the right to keep animals, and that the state has the right to keep them.

You would like this movie if you got a chance to see it, I think. The lines in it are so clear. The Hoban original is very well-done, too.

Ultimately, the theme is a mess: animal rights for green sea turtles is a metaphor of some kind for finding one's own way -- it's perhaps two themes on top of one another, but they're not necessarily at odds. they're just moving in two different ways, connected by the notion of freedom, which seems very important, and is, at least in this film, within easy reach of everyone.