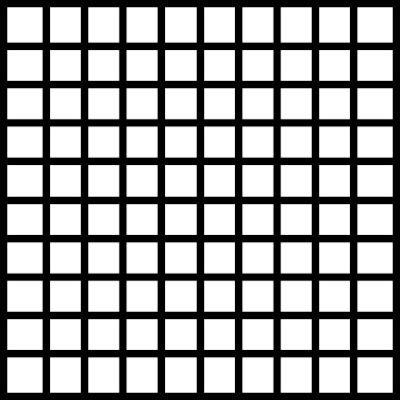 Quotient
By Garrett Staughton
I
The world divided by itself equals zero. Ice caps evaporate into void.
I arrive bearing the evidence for a conviction.
Embedded logic shifts along fractured intervals.  Inside white walls, insulation spontaneously implodes.
Lead doors.
The smallest seizure may be undetectable.
I break my gold-rimmed glasses, throwing them on the pavement.  This is not a gesture, but a sign.
Each paradigm supplies its own analog.
Returning to a point preceding his birth, he finds prehistoric structures in an advanced state of decay.
We're temporarily experiencing technical difficulties.
Irritability is a tic. Surveillance systems track our every move.
I stands for something.
You make a wish. The world waits breathlessly for your decision.
The typographer's dummy. Duh. Duh duh duh!!!
Distorted vowels, frayed towels, sleepless owls, flabby jowls, wooden dowels, feral yowls. Making it up as it goes along, he sings his onely song, going going gong.
A snoring.
Form follows function.  Stairway to the stars.
Hostile precincts of the countryside are camouflaged as landscape. Morale is high.
Clouds approaching from three directions.
The roots of the tree snake along underneath our presumptions.  Thought is insidious, impossible to kill.
Repeat after me.
Birds chirping to define territory and secure mates, we hear as pure song.  Coffee cools in the cup.
Contamination occurs at all points. Black dust seeps in under the floorboards.
Age dates the slugger.
The young king’s tomb spills tokens through a hole into a plastic tray.  London Bridge is falling down.
Driving a golden spike through Ford’s mercenary heart.
We greet the nuclear blast standing atop the tallest building in the metropolis, arms spread, awaiting armageddon like the ghosts of Babylon.
Meaning fizzles in a random dance.  Sky colors awe the summer crowds.
I intend a contradiction.
Moon looks down on a black lake, a tar puddle surrounded by flickering gas fumes.
An Alabama drawl softens the spoon.
Drones are the pornographic metaphor for the jack-off culture of intuitive leaps: frustration leads to premature ejaculation.
Jackhammers gunning for gas lines, break through the city water main, transforming the street into a Harlem fountain.
In early youth, the learning curve levels off.
This is a poem.
Universe in the shape of a canoe.
Traveling in a train, we walk backwards toward the caboose, arriving at the engine car.
He killed his puppet.
Outcome determined by chance operations.
Sheet glass windows sheer diagonally along crystalline fault lines.
You don't have to think about breathing.  Someone has brought in the paper.
Imagine that women can read your thoughts.
See Rome and die, but don't forget your health insurance card.
It's the afternoon commute, traffic reports and the evening news concluding the number of dead in Afghanistan. Sunset blood red.
The effect can't be duplicated. You had to be there.
The general bristles and his little finger twitches. Tanks rumble down Main Street to make their point.
Competing factions grease the hand-organ.
Matter is arrested light. The tunnel is sealed off.
Beltway rusted shut. Impressions are conveyed via our nerves.
Each object defines its use; we carve up the consequences.
Billboard at the end of the world--Zeppelin's upside down...
Can you imagine something that wasn't there?
Bowsprit's rather yar. America wins Nobel Peace Prize!
Salt flat one inch above eye level. Black stripes on white roadway lead to....
It's so easy you could do it in your sleep. Examples are virtually everywhere.
Identity is a disguise. Someone's knocking at the door.
Check the sub-cats and then lock up before you leave.
Familiar mascot's a crash-dummy with a prosthetic arm.
Not funny, McGee.
You are directed to appear. Everyone is writing mysteries.
The level of statement is exactly proportional to the sentiment expressed.
Audience clicks and hisses. Orchestra omits third movement.
Now I'm being serious. What's the matter?
Haitians reading bar codes. Mountains of dead batteries.
Flash cards pop up along the horizon-line.
Any part of the grid is not more compelling than a chocolate milkshake.
Posted by Curtis Faville at 9:51 AM

Drones are the pornographic metaphor for the jack-off culture of intuitive leaps: frustration leads to premature ejaculation.

Drones do not lack for metaphorical significance, of an Orwellian if not Doomsdayian sort (then...ICBMs do as well). The next big War will probably be fought via drones and bots, until one side gains the upper hand and the serious liquidation begins

I'll be watching it on tv.

The hatred and jealousy--it's slowly eating you.

Naw. I'm having a terrific time. Perhaps a bit mischievous, but no hatred and no jealousy here.

So you wrote this awful poem, probably know it's awful but not wanting to own up to up, and attributed it to an obvious pseudonym. You're a real winner, Curtis.

Obviously it's a parody, but that may have gone right over your head. Or--maybe it isn't!

"I would never publish a poem like this. It's not me."

What's really fun is publishing an unknown poem of a great writer and letting people think it's inferior, because they're too stupid to judge it independent of its associations (authority). I've done that, and it's lots of fun.

I forget--maybe it was Larry Fagin--who did--or wanted to do--a magazine of poems without giving the names of the authors. This frustrated Silliman no end--he thinks the author (and the context of authorship) are crucially necessary to any appreciation of a naked work. But knowing the author takes away all the fun and direct apprehension.

Who do you actually think wrote this, Anon?