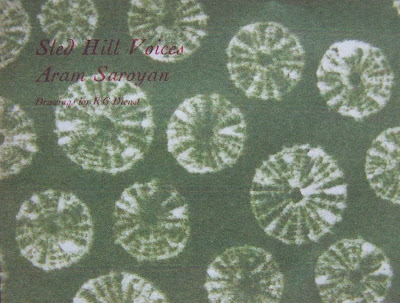 Pastoral has a long tradition in English verse, which derives from Greek and Roman sources (Hesiod, Ovid, Virgil). In traditional pastoral, nature serves as a backdrop for man's appropriation, expressed through meditative, erotic, or agricultural modes of use. The idealization of landscape, and to a probable pre-existing state of perfect harmony between man and nature, takes a turn in the Victorian Age, and by the 20th Century, ambiguities and complexities creep into the equation, leaving naive versions of pastoral behind.
By the 1960's, the bucolic clichés had long since been abandoned, though the idealization of nature had entered a late phase. The first generation of New York School Poets (Ashbery, O'Hara, Schuyler, Koch) entertained a vicarious, camp position in relation to the pastoral tradition. But the High Modernists such as Williams (of Spring & All) and Zukofsky (of All parts I and II) had extended it, though couched in Modernist language and formalities.
Aram Saroyan's minimalist, post-Modernist experiments of the 1960's present a revolutionary application of pastoral, one in which the signifier is objectified, and the object (nature) is isolated from its traditional literary contexts, and given new life as a purely hygienic phenomenon, vicarious, joyful and witty.
Sled Hill Voices was published in 1966 by Goliard Press, printed letterpress in an edition of only 450 copies [pictured above]. In its brevity and concision, its discrete gestures acquire truly elemental scale, making of the least utterances fully comprehensive icons of idealized natural phenomena. On its own terms--of only six pages long, and only 48 words!--it bids to be taken as a whole, rounded and complete segment--in time and space--of the relation between the authorial persona and "the garden" (landscape, outdoors).
not a
cricket
ticks a
clock
The setting of the poems--as a suite of pieces devoted to the pastoral--occurs initially through the apprehension of sound, as heard from an interior (clock), confused with or compared to the sound of crickets (outside, in nature). The grammatical relationship between "not..." and the cricket(s) evokes a musical echo ("and all through the house, not a creature was stirring, not even a...")--not even a cricket. But crickets don't "tick"-they vibrate or buzz by rubbing their hind legs together, in order to attract mates. The poem's lack of elaboration and careful construction suggest silence, or the flatline of listening for the lowest registers of sensory data.
something moving in the garden a cat
The duration of silence here is interrupted by the awareness of the existence of another being--a cat--moving silently (or surreptitiously) through the garden. The "something moving" becomes the cat along the time-line of the sentence--we discover (or notice) the cat by the end of the phrase (or sentence fragment): In a sense, the cat "arrives" or achieves identity through the nominal signified word "cat." It's a minutely constructed mystery, in duration only the segment of six words' length. The phrase drifts horizontally in either direction, in perfect balance, like a pendulum, a little machine made of words. Too, the cat introduces the additional element of predatory fauna--the cat is certainly "hunting" for something, an entirely instinctual behavior in stark opposition to the classic pastoral conception of a gentle, happy, innocent landscape.
Sunday
as the
grass's
cut
and its smell
rises
twice
The parameters of the setting are expanded as the sabbath-day, and the fertile ground of man's appropriation is further elaborated as a territorial "lawn" or turf, tended and demarcated as generic cultivation. But importantly the only impression it leaves is the olfactory. What would it mean to have a smell "rise twice"? Perhaps the metaphorical shearing of the possessive "grass's" (in which the apostrophe acts as a blade, separating the two s's from each other) implies a division, in which the two stanzas--separated, again, by the metaphorical "cut"--each produces its own distinct smell. This may strike one as a gloriously precious interpretation, though it is through the action of just such subtle means that the effects of minimalist poems are achieved.
incomprehensible birds
Here is flurry, multiple confused action contracted by a rapid six-syllable firing--in-com-pre-hen-si-ble--a veritable phonemic rat-a-tat-tat of action which both signifies and mimics the objects (birds). A palpable amusement at the indefinable complexity of the natural world, as an animate flock challenges the prevailing order of rest which the previous three poems had established. The disturbances of the meditative space proceed then to--
what energy pops
flops her
on her back
laughing
in the water (1)

--in which buoyancy (or eruption) is enacted through a sequence of visual and aural detonations portrayed as visual leaps or stepped descents.2 The poem achieves a perfect oscillating balance as a further elaboration of the action of bodies in complex motion (as the incomprehensible birds does). The evocation is neither specifically visual, nor aural, but a combination of the two senses, where the words both stand for (signify), and (en)act, what they literally "say." "What energy" is exclamatory ("what energy!") and inquisitive ("what [kind of] energy [is it]"?), held in balance as the very fulcrum of dynamic ebullience in which the body is suspended, on water, in air, in the phenomenal space of the poem's presence in the void of the page's white space. Nature (matter and energy conjoined) in a post-Einstein universe are indistinguishable from each other. The pure joy we feel at the bracing impact of moderate physical sensation is delight--a harmony not conceived as a sentimental regard for the sweetness or satisfaction of closure and static virtue, but as a balance of energetic forces in a taut dilemma.
the noises of the garden among the noises of the room
--functions as summary closure. What are the terminal limits of "garden" as tamed by conscious manipulation, and the untended "wild" beyond our control? The noises of the garden is like a tape which flows, a complete circle or mobius strip of linear time line data--through the air, through the window, flowing round the room, and then out again, the concentric waves of sound connecting us (via sounds) both to events beyond our immediate place, and to an immediate confirmation of our reflexive self-consciousness. The transposition of inner and outer worlds, the awareness of the totality of the inter-relationship of body, mind, universe, as perceived through instigations of language, all occur as such ingenious promptings, out of the most apparently modest (though in another sense, the mostly grandly ambitious) of means.
Saroyan's Sled Hill Voices is about as perfect a book of poems as one could well imagine. Among a handful of ingenious works produced by Barry Hall and Tom Raworth in London during the 1960's--crucially important as part of the "American invasion" of the New American Poetry (into Europe) after the Allen anthology benchmark--it stands in my mind as a brilliant collaboration of book art and innovative content. And Saroyan seems to have been wholly original in his experiments. The empirical verification of the authentic value of one's thought and performance is finally the work itself. Like Oppen, as evidenced by Pound's remark about Discrete Series, he seems not to have gotten his ideas "out of any other man's books." 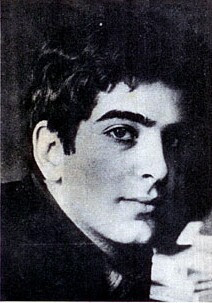 _____________________
1. Because of the limitations of Blogger, I was unable to set this poem as it should be. This is only a crude approximation of the indentations of lines 2-5. Sorry!
2. Obvious antecedents for this stylistic approach would be the work of Larry Eigner or Paul Blackburn, two poets whose work demonstrates the potentials of visual and musical pacing and control on the printed page.
Posted by Curtis Faville at 9:10 AM

Anonymous said...
This comment has been removed by a blog administrator.
November 4, 2011 at 2:36 PM

Would you kindly do me a favor? — you have two postings showcased with my name. The first one are not my words, nor did I post. Kindly remove this bozo comment slated to me. It's an untruth, and boring. The second, and shorter one, is mine — an answer to your query about "Anon".

As to the Joseph Massey time — it is not at all my memory of ever being "indignant". I just wasn't in agreement with you. Quite a natural ability, and likewise remaining friendly.

I've deleted all these comments as being somehow tangential.

Longhouse maintains a wonderful venue for contemporary poetry, for which all of those of us who value it must be grateful.

Joe Massey is a very talented young poet, whom I thought--in my way--to steer back onto course. How stupid of me!

Keep up the good work, and thank you so very much for paying any attention to my pathetic blog-site.

I loved Dave Garroway and it's somehow a perfect evening to remember him — we're in snow in these parts and by a warm fire. Thank you for that.

And to your abiding to Longhouse. The feeling is mutual.

Joe Massey is steering by himself quite nicely without either of us.
Let's lend him a hand, if he asks.