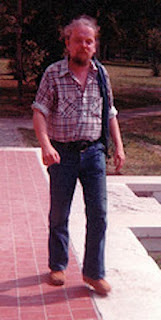 Ted Berrigan wrote a poem once called "People Who Died"--which you can read in his Collected Poems, and even hear him read via the PennSound link. Berrigan had at least two sides to his nature--one very weirdly insincere and playful, and one very emotional and occasionally sad. I was reminded of it yesterday when I received word that Anselm Hollo, who had been my first poet-instructor at the Iowa Writer's Workshop in 1969, had died yesterday morning in Colorado, surrounded by friends and family, following a long and exhausting illness. And again just now, when the spam-box of my email just received an advertisement for "Life Insurance." What a funny concept, when you think about it, life insurance.  There isn't any such thing as life insurance; no one, nothing can insure you against death. We're all uninsurable! And yet the business stubbornly refuses to acknowledge the fact, playing off our fears and apprehensions about the consequences of mortality. It's very important, apparently, to make elaborate and fail-safe plans against the possibility of dying messily, as if one of our most crucial responsibilities, in life, or most important tasks, for those who are left behind, was to relieve them of the problems, the loose ends, created by our departure.

Since I began writing this blog, I've written about quite a few writers, many of whom are dead, some of whom died after I wrote about them. Several of the subject pieces were written on the occasion of their deaths. Growing up in a family of exiles, I was not raised to pay much attention to death, or to mark its occasion with much fanfare. My parents had both left the Midwest, to find a new life on the West Coast, during WWII. They tended not to say very much about the people, or the life, they'd left behind, the people they had known who died, including their parents. Their exile was a form of alienation, not uncommon in this restless mobile land of the free. I've never been a church-goer, as an adult, so attending funerals isn't something I do. Sometimes I think that not marking death's occurrence in a formal way helps to keep the idea of it, its presence, at bay. However, I do think about death, and increasingly now in my mid-60's. For some reason, it surprises me to realize I have reached this stage in my life, though I always knew I was destined for it. It seems to have snuck up on me, as it does to most people, while I was just minding my business, attending to my plans and expectations for the present and future.

What all these names have in common is that they're all dead people. Some of them died after I wrote about them: Louis Simpson, Jack Gilbert. I wrote a handful about a few when they died.

My only son died in 1996, in an automobile accident. His death was premature, certainly, but he had been an early-onset diabetic since the age of 4, so his longevity-expectation was not as remote as most. I will certainly never "get over" that tragedy; it will be with me always, along with the certain knowledge that I will not be survived by any descendants. Not that that part bothers me very much. Once in a great while, I think of my maternal great-grandmother, a woman who had been very beautiful in her youth, whom I know only through old sepia photos taken before the end of the 19th century. But I doubt she would have been much interested to know that I was coming down the road; she was very Victorian and formal and dismissive, by all accounts. Does anything of what she was survive in me? Who knows?

During the years I attended the Iowa Workshop, Ted Berrigan and Anselm Hollo were great friends. When Berrigan and Alice Notley had their two sons, they named one Anselm in his honor. Anselm went on to teach at other places, and eventually joined Naropa University as a member of the permanent faculty, where he taught for the last 25 years of his life. When I first knew Anselm, he was just living in America with a "Green Card"--worried about being refused permanent residence and/or American citizenship. A fact not often cited was that Anselm had lived in Iowa City as an "exchange student" while still in high school, traveling from his native Finland in the early 1950's. Later, after periods of living in Germany, and then Britain, he came to America. He actually seemed rather British in his manner, when I knew him, though he was a complex man, of many influences.

Anselm was a brilliant, and very well-educated man, but he hid his shrewdness and his erudition--at least in the time I knew him--under a veneer of almost continuous amusement and self-deprecation. This was partly a gentlemanly courtliness, but partly a self-effacing shyness. Anselm probably thought of me as a pretty square fellow, but he was always considerate and respectful and indulgent of my immature writing.

Anselm was a realist. His poems were about real things, and the voice he cultivated as a writer was his own voice, a voice that reflected how he actually thought, without pretense or equivocation. Just being around him was a demonstration of the honesty he projected as an artist. Anselm the man, though, had some difficulties maintaining the various personae of his life: teacher, husband, father, poet, friend. I suppose he managed to come to terms with his various demons in the years after I knew him.

The thing about Anselm was that his mind floated over the facts and conditions of his existence with a sort of equipoise. A speaker and a reader in several languages, he seemed to perceive life (and history, and literature) in layers. This sense of being above events and somehow apart from them gave his conversation, and his work, a sense of objectivity. He maintained the air of an amused skeptic, always ready to find delight and absurdity in the baffling events of the larger world. He never seemed to take himself so seriously that he couldn't see irony or vanity in his own life.

Though our paths never crossed again after I left Iowa in 1973, I remember Anselm Hollo as a felt presence in my life. He left an impression, in a way that most of the other teachers or friends I've had, didn't. An impression of kindness, gentleness, delicacy, and penetrating perspicacity. By the time I learned that he was dying, it was too late to tell him these things.

But Anselm was not the fellow to accept open praise--that kind of formality was not something he seemed to wear comfortably. Nevertheless, I'm moved to tell him, though he will never hear or read these words. What we say about people we loved or admired, after they've died, is important to us, the living. It is our way of saying what we feel. It's a formal act, almost religious in its implication.

Bless you, Anselm, for your words and your work. Your memory lives on.
Posted by Curtis Faville at 4:09 AM

am here
working on and nearin=g the end of my new run-of-poems. Calling it:
AS I RECALL : POEMS OF AN URBAN HERMIT

this past week, as is my method, i have scribbled-out
notes on what just might be the last piece in the book.
in first line I have Old Holly ... some perfect enso, eh (Hollo). I never met him / knew him but was in several mags with him in 70's ... just before I dropped out. Now that I am
"back' I search the net looking for those that i knew or nearly knew or failed to (get to know) and to re:connect with those that I did know... not very many are yet alive .... and kicking !

Between the two Silences
Everything else

here is the opening as it so far is:

neither there nor here nor separate
from:

now ? after I am dead, the house and me will be worth a lot of money. Big Phuching Deal !

it s tone
it s rhythm
it s duration

shld be over to the right
w the "i" of each line falling
under the "r" of reverie ...

that way one can "see" how everything
is inter-connected to and interrelated to every other thing / person and where each is its own center of : which has nothing to do with any invented or adopted ....ego.

what does this have to do with Anselm Hollo ? I certainly know ...what ... but can't,
for the life of me, explain it ! just read what poetry he has left

what most of the good poets had in common ? a Sense of Humor Damn
few of us left !

will write you another poem when
I have less time

Anselm lived in my town, Salt Lake, for a couple of years. I was lucky enough to sit at his table a number of times sharing poems. For selfish reasons I wished he and Jane had stayed in Salt Lake, but Boulder/Naropa was obviously the right move for them. Loved the man - love his poems - kind of a detached observer (almost an "alien" point-of-view) humorously commenting on the behavior of us crazy humans down on earth.

Anselm lived in my town, Salt Lake, for a couple of years. I was lucky enough to sit at his table a number of times sharing poems. For selfish reasons I wished he and Jane had stayed in Salt Lake, but Boulder/Naropa was obviously the right move for them. Loved the man - love his poems - kind of a detached observer (almost an "alien" point-of-view) humorously commenting on the behavior of us crazy humans down on earth.

The Finnish character in general finds it hard to take in compliments, and is observant and shrewd. I never him in person although we corresponded quite a bit when I was in Finland. He sounds very much as if he was a typical Finn.